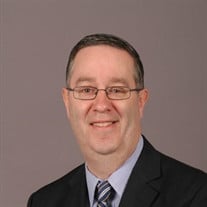 Andrew Barrie Bailey, age 45, of Sherwood, Oregon, formerly of Crown Point, Indiana, passed away on November 25, 2019. Andrew was born on July 24, 1974 in Adrian, Michigan. He stepped into the arms of his Saviour at his home in Sherwood, Oregon on November 25, 2019. Andy was raised in a solid Christian home. At the age of five years old, after hearing a sermon at church about eternity, Andy realized he was lost and did not want to spend eternity separated from God. On June 10, 1980, while kneeling by the side of his bed, his mom showed him from the Bible how to know for sure he would spend eternity in Heaven. Andy always said that was the greatest decision he ever made. When he was in eighth grade, his youth group took a trip to Youth Conference at First Baptist Church in Hammond, IN. At that conference Andy surrendered his life to serve the Lord full-time and that began his journey of a life of Christian service. After he graduated from Hyles-Anderson College in 1998, Andy married his college sweetheart, Jennifer (Young), on June 19, 1999. Andy always said that was the second-best decision he ever made. Andrew and Jennifer have two beautiful daughters, Kaitlyn (11) and Kristen (9). Andrew served on staff at Hyles-Anderson College for 23 years. During that time he worked with activities, athletics, summer tour, student recruitment, residence halls, campus host, online studies, and as a personal assistant to Dr. Wendell Evans. Andy became the Vice President of Student Life in 2016 where he worked directly with the students overseeing the residence halls, discipline, and athletics. Andrew served as a bus captain for eleven years and taught a third-grade boys' Sunday school class for eight years. He transitioned to teach an adult class for four years. In December 2018, he and his family moved to Sherwood, Oregon where he became the assistant pastor at Timberline Baptist Church. It was the thrill of his ministry to have the opportunity to serve the Lord alongside his friend and mentor, Pastor Stuart Mason. During his eleven months at Timberline, he endeared himself to the church members, youth group, and community in Sherwood. Andrew touched literally thousands of lives. His heart for God was evident as he ministered to each person individually. He was meticulous, detailed, and diligent in everything he did. He loved God, he loved people, and he served both. He was a loving husband and a dedicated father. His favorite place in the world to be was wherever his family was. He cherished Jennifer and adored Kaitlyn and Kristen. Andrew was in every sense of the word, a “good” man. Andrew was preceded in death by his hero, his dad, James Bailey. They are reunited in heaven cheering on University of Michigan football together. He is survived by his mother, Shirley Bailey of Adrian, MI; his precious wife Jennifer; two beautiful daughters, Kaitlyn and Kristen; and three sisters; Margaret (Dave) Barber of Tennessee, Diana (Frank) Stanley of West Virginia, and Rebecca (Ben) Turner of Vancouver, Canada. A funeral service will be held on Saturday, November 30, 2019 at 11:00 a.m. at the Timberline Baptist Church, 24645 SW Old Highway 99 W, Sherwood, Oregon 97140. Attrell’s Funeral Chapel in Newburg, Oregon are handling the arrangements. Www.attrells.com An Indiana funeral service will be held on Monday, December 2, 2019 at 11:00 a.m. at Hyles-Anderson College Evans Auditorium, 8400 Burr Street, Crown Point, Indiana. There will be a viewing from 10:00 - 11:00 a.m. prior to the start of the service. Burial will immediately follow at Memory Lane Memorial Park Cemetery in Crown Point, Indiana. Memory Lane Funeral Home, 6305 W. Lincoln Highway (US 30), Crown Point, Indiana, are handling the arrangements in Indiana. Www.memorylanepark.com. (219) 322-2050. The Timberline Baptist Church has set up a donation page for the family: https://timberlinebaptist.churchcenter.com/giving/to/bailey-family

Andrew Barrie Bailey, age 45, of Sherwood, Oregon, formerly of Crown Point, Indiana, passed away on November 25, 2019. Andrew was born on July 24, 1974 in Adrian, Michigan. He stepped into the arms of his Saviour at his home in Sherwood, Oregon... View Obituary & Service Information

The family of Andrew Barrie Bailey created this Life Tributes page to make it easy to share your memories.

Send flowers to the Bailey family.