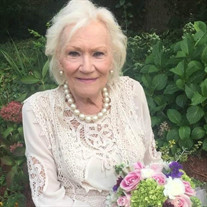 Anna Francis (Whitehouse) Howard of Schererville, Indiana went to be with the Lord on Wednesday, January 19, 2022. Anna was born on September 16, 1935 in Owensboro, Kentucky to Harold and Mabel Shown. She was preceded in death by her four siblings: Doris (Shown) Hurley, Kenneth Shown, Wanda (Shown) Snyder, and Harold Shown. Anna was married to Bill Whitehouse for 41 years, and they moved to the Northwest Indiana area for the booming steel industry job market soon after they were married. While Bill and Anna were raising four young children, Anna was searching for a solid church to raise her children in. She desperately wanted her children to grow up to be good people, and she knew that church was a vital part of that process. One day Anna heard Dr. Jack Hyles on the radio as she was cleaning her home. He was chatting about the number of folks who had attended the church service on the previous Sunday. Anna turned to the radio as if she were talking directly to Pastor Hyles and said, “Oh, you bragger!” No sooner had those words left her mouth, then Pastor Hyles seemed to respond directly back to her, “You say, I’m bragging! You’re right. I’m bragging on what God is doing here!” Her heart was moved, and she quickly decided to visit First Baptist Church of Hammond in 1967. The following week, Charlie Hand, an assistant pastor at FBC, knocked on the Whitehouse family’s door in East Chicago. That day, Charlie Hand led Anna Whitehouse to the Lord! In the following years, all of the family were saved and became faithful members of the church. Anna was preceded in death by her husband Bill Whitehouse who went to Heaven in 1993. Anna became a faithful soul winner and won many, many souls to Christ at the nursing homes in Northwest Indiana. She never missed a church service unless she was very sick, and she loved her position at the visitor’s desk at church where she greeted the “regulars” and visitors alike and made them feel a part of the church family. Anna’s family was pleasantly surprised when she began “seeing” a good, godly man from church, Richard Howard. In September 2017, Anna and Richard were married in a beautiful ceremony attended by many family and friends. They were united in serving God by serving at church, and they have been constant companions the last several years. Anna’s legacy of faithfulness to her Lord Jesus Christ will live on through her children, grandchildren, and great grandchildren. Anna is survived by her four children: Debi (Ray) Young; Keith (Tracy) Whitehouse; Daryl (Laurie) Whitehouse; Cheryl (David) Kerner; and 12 grandchildren: Jennifer Bailey (Andrew, deceased); Linda (John) Tutton; Lacey (Jason) MacRae; Lauren Whitehouse; Will Whitehouse; James (Kassie) Whitehouse; Jessica (Curtis) Hayman; William (Faith) Whitehouse; Keith Whitehouse; Jarrod (Rachel) Stotmeister; Melissa (Josh) Petrow; Heather Kerner; and 17 great grandchildren: Kaitlyn and Kristen Bailey; MacKenzie and Lindsey Macrae; JT, Raeanne, and Jaimee Tutton; Taylor, Logan and Rylee Kerner; Brian, Josie, Jaclynn, and Dale Stotmeister; Grant Sawyer Whitehouse (born on 1/20/22- Mamaw couldn’t wait to meet this little one); Felicity and Spence Whitehouse; and yet to be born in July 2022, twins due to William and Faith Whitehouse. Visitation will be on Monday, January 24, 2022 10 a.m. to 12 p.m. with the service beginning at 12 p.m. at the First Baptist Church of Hammond, IN in the Jack Hyles Memorial Auditorium. Interment to follow at Memory Lane Memorial Park.

Anna Francis (Whitehouse) Howard of Schererville, Indiana went to be with the Lord on Wednesday, January 19, 2022. Anna was born on September 16, 1935 in Owensboro, Kentucky to Harold and Mabel Shown. She was preceded in death by her four... View Obituary & Service Information

The family of Anna Howard created this Life Tributes page to make it easy to share your memories.

Send flowers to the Howard family.