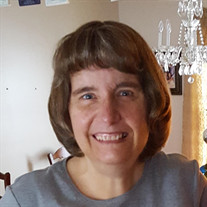 Barbara Ellen Johnson, age 57, passed away peacefully with family by her side on January 18, 2019. She was relocated from Des Moines, Iowa to Saint John, Indiana in 2014. Due to her declining health she recently was a resident at Great Lakes Healthcare in Dyer, Indiana, where she received loving care by all the staff. Barbara was born on June 18, 1961 in Dell Rapids, SD, to the parents of Floyd and Pat (Heldenbrand) Johnson. When she was 2 years old she was diagnosed as being deaf. She then entered the South Dakota School for the Deaf which was located in Sioux Falls just a short distance from her small hometown of Valley Springs, SD. Fortunately, she was able to come home on the weekends, unlike many of the other students enrolled in school. After graduating from high school Barbara attended Temple Deaf Bible College in Peoria, Illinois. Upon graduating from college, she moved to Rochester, NY. Between those two locations she made many life long-lasting friends. Those friends would later become a great support as she faced the future diagnosis of cancer. In 1997, she moved to Des Moines, Iowa to be closer to family. While living in Des Moines she worked at various jobs provided through Easter Seals. Another blessing she had while in Des Moines was making friends with Sonja and Joleen, who would later become her only support with her cancer as family had moved away from the area. In 2001, Barbara was diagnosed with cancer of the appendix. This cancer became an extremely difficult disease to live with in the following years. There were many times that doctors didn’t feel she would recover after surgery. However, God had other plans for her to continue living on this earth. After her last surgery in 2014, she was placed in a rehabilitation facility. However, she wasn’t receiving proper care and her sister, Susan Anderson, and brother-in-law, Todd would move her into their home in Indiana to care for her. Barbara once again bounced back and was able to live alone once again. She remained on her own until last summer when the cancer reared its ugly head. From that hospital visit she would be placed on Hospice and live her remaining days at the Great Lakes Healthcare Center. During the last few months Barbara enjoyed being around others and smiled at all those working or living at the center. She is survived by her mother, Pat (Heldenbrand) Wiles of Texas; sister, Susan (Todd) Anderson of Indiana; niece: Amanda (Steve) Herrmann; nephew: Spencer (Katherine) Anderson; dearest and longtime friends: Sonja Kayser, Joleen Gallant and Tracey Saville. She was proceeded in death by her father, Floyd Johnson; step-father, Merle Wiles; brother, Ken Johnson; both sets of grandparents; cousin, Kim; and many great aunts and uncles. A Memorial Service will be held for Barbara on Saturday, February 16, 2019 at 11:00 a.m. at the Memory Lane Funeral Home, 6305 W. Lincoln Highway (US 30), Crown Point, Indiana. There will be a one-hour visitation prior to the start of the service. You may contact the funeral home for further information (219) 322-2050. www.memorylanepark.com

Barbara Ellen Johnson, age 57, passed away peacefully with family by her side on January 18, 2019. She was relocated from Des Moines, Iowa to Saint John, Indiana in 2014. Due to her declining health she recently was a resident at Great Lakes... View Obituary & Service Information

The family of Barbara Ellen Johnson created this Life Tributes page to make it easy to share your memories.

Send flowers to the Johnson family.