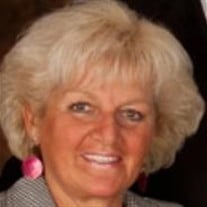 Bonnee Lee Reay, 68, of Schererville, Indiana entered Heaven on January 8, 2017 after a long battle with cancer. Bonnee married Tim Reay in 1972, and then in 1975 they moved to NW Indiana to attend Hyles-Anderson College. She and Tim had 8 children (2 of those have already preceded her in death), and being a wife, mother and grandmother was the love of her life. After serving in various places, Bonnee and Tim moved back to NW Indiana in 1995, where they have been members of the First Baptist Church of Hammond, Indiana. Bonnee was a full-time wife and mother, but also was a substitute teacher at the Hammond Baptist Schools in Schererville. If you knew Bonnee for any length of time, you would know that her favorite color was any shade of Pink! She would be honored if you wore any shade of pink to her funeral. Bonnee is survived by her husband, Tim, of 44 years; her children: Buffy Jo (Darrell) Ratcliff, Tiffany Ann (Joe) Tittle, Holly Sue (Tom) Doring, Mandy (Matt) Reynolds, Heidi Rose (Cody) Lansford, and Ryan Timothy (Emily) Reay; her 8 grandchildren and baby Knox who will be born in a few months. She is also survived by her siblings: Cathy, Greg and Julie. Her parents, Don & Harriet Thoen, preceded her in death. A viewing will be held on Thursday, January 12, 2017 from 4:00 – 8:00 p.m. at the Memory Lane Funeral Home, 6305 W. Lincoln Highway (US 30), Crown Point, Indiana. The funeral will be held on Friday, January 13 at 11:00 a.m. at the funeral home with a one-hour visitation prior to the start of the service. Pastor John Wilkerson will be officiating. Please call the funeral home for further information (219) 322-2050. www.memorylanepark.com

Bonnee Lee Reay, 68, of Schererville, Indiana entered Heaven on January 8, 2017 after a long battle with cancer. Bonnee married Tim Reay in 1972, and then in 1975 they moved to NW Indiana to attend Hyles-Anderson College. She and Tim had... View Obituary & Service Information

The family of Bonnee Lee Reay created this Life Tributes page to make it easy to share your memories.

Send flowers to the Reay family.