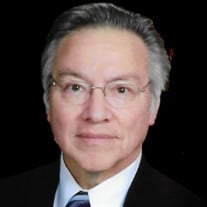 Daniel Hidalgo, age 70, of Crown Point, Indiana, passed away on Friday, October 5, 2018. He is survived by his loving wife, Brenda; his loving children: Daniel (Laura) Roman Hidalgo, and Nick (Maritza) Hidalgo; and his beloved grandchildren: Jaiden, Joseph, Ava, Ariana, and Nico. He was preceded in death by his father, Brigido; his brother, Raymond; and his sisters: Sandra and Dedra. A visitation will be on Friday, October 12, 2018 from 9:00 - 10:30 a.m. at St. Mary's Catholic Church, 321 E. Joliet Street, Crown Point, Indiana, with the funeral mass beginning at 10:30 a.m. at the church. Burial will follow at Memory Lane Memorial Park cemetery, 6305 W. Lincoln Highway (US 30), Crown Point, Indiana. Danny was a Viet Nam veteran, and after his military service he worked at Inland Steel Company and retired from there after 33 1/2 years. He also worked at Sullivan Elementary School and was a former Precinct Committee man for the city of Crown Point. He was a coach for many years with the Merrillville Little League, basketball, and soccer. He was known as "Uncle Danny" to many and was always engaged in fierce conversations about religion and politics. Danny loved music, dancing and singing, and he especially loved being with the grandchildren, family and friends. In lieu of flowers, memorials may be given in his honor to the Richard L. Roudebush VA Medical Center, Fund: GPF 7012, 1481 W. 10th Street, Indianapolis, IN 46202. Funeral arrangements are being handled by Memory Lane Funeral Home. You may contact the office for further information (219) 322-2050. www.memorylanepark.com

The family of Daniel Hidalgo created this Life Tributes page to make it easy to share your memories.

Send flowers to the Hidalgo family.