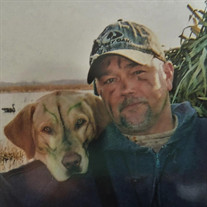 Darrell K. Head, 58, of Valparaiso, IN passed away on March 20, 2017 with loved ones by his side. He is survived by his mother, Goldie Head of Leroy, Indiana; sister, Glenda (Tom) Brannon of Palm City, Florida: brother, Al Head of Lowell, Indiana; daughter, Gina Head Clare, of Jensen Beach, Florida; nephews: Alan M Head, Larry Brannon, Jason Brannon and Brian Head. Darrell was preceded in death by his father, Glen Head. Darrell was a member of Laborers' International Union of North America, Local 41 since 2003. He was an avid hunter and fisherman. He was a huge fan of Chicago sports teams—the Chicago Blackhawks in particular! With his quick wit and mostly easy going persona, he made many friends (and some enemies) over the years. He was an avid Harley guy for many years until his health no longer permitted him to enjoy his hobby. He was a devoted son, cherished brother, nephew, and uncle. He was a beloved friend to many, particularly some very, very special people who helped him immensely in the last couple years of his life. He worked very hard in those years to overcome extreme obstacles, and without that help and love, well, not sure what life would have been like for him. He talked often about how grateful he was for all of you, and the love he had for you. He was our baby brother, our friend, and one of the most memorable characters of our life. He was an inspiration to us the last few years. He will be greatly missed by many of us, and always in our hearts. A visitation will be held on Saturday, March 25, 2017 from 11:00 a.m. to 1:00 p.m. at the Memory Lane Funeral Home, 6305 W. Lincoln Highway (US 30), Crown Point, Indiana. The funeral service will begin at 1:00 p.m. at the funeral home. Burial at Memory Lane Memorial Park will be private. You may contact the funeral home for further information (219) 322-2050. Condolences may be left on the website: www.memorylanepark.com

Darrell K. Head, 58, of Valparaiso, IN passed away on March 20, 2017 with loved ones by his side. He is survived by his mother, Goldie Head of Leroy, Indiana; sister, Glenda (Tom) Brannon of Palm City, Florida: brother, Al Head of Lowell,... View Obituary & Service Information

The family of Darrell Keith Head created this Life Tributes page to make it easy to share your memories.

Send flowers to the Head family.