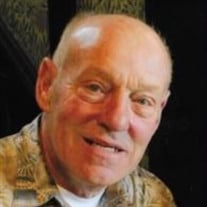 Dennis Dale Wasson, 79, of Brook, Indiana—formerly of Schererville, Indiana—went to be with the Lord at his home on August 4, 2020, surrounded by his loving family. He is survived by his wife of 55 years, Martha Wasson; his daughter, Heather Knoerzer (Tommy); his son, Bryan Wasson (Pamela); also his grandchildren, Blake Wasson, Lexy Schurg (Darden), Gavin Wasson, Trey Knoerzer, Camryn Wasson, and Chloe Knoerzer. He was known as a family man and was loved dearly by many of his nieces, nephews, cousins, and his brother-in-law, Ed Williams (Debbie). Dennis was preceded in death by his parents, Everett and Reba Wasson, sister Janiece Ashworth, and brother Dwan Wasson. He was the great patriarch of our close-knit family whose wisdom and advice was often sought; whether it was working on a car, restoring a house, or repairing a heart, he usually had all of the answers. He set a tremendous example for his family and friends through his honesty, strength, and love. Dennis was a 1960 graduate of Calumet High School and attended Purdue University. He was employed by the University of Chicago as an operating engineer for 31 years before retiring. He served our country in the U.S. Army from 1964-1966. He accepted the Lord as his Saviour at the age of twenty-one at First Baptist Church of Schererville under the leadership of Bro. McKutchen. He then went on to become an active member of the First Baptist Church of Hammond, Indiana, where he served as a deacon and Sunday school teacher for many years. He enjoyed the great outdoors as an avid waterfowler and fisherman where he had made many friends over the years who shared the same passion. Dennis was liked by many and known to always have an entertaining story to share. He was “Uncle Denny” or a “Second-Dad” to many who were not even related by blood, whose hearts, like the family’s hearts, were knitted to his leadership and his unshaken belief in the Lord. Services will be held at Memory Lane Memorial Park in Crown Point, Indiana on Saturday, August 8, 2020. Viewing will be held at 10:00 am with a service to follow at 11:00 am officiated by Pastor Gary Roberts of Community Baptist Church of Monticello, IN.

Dennis Dale Wasson, 79, of Brook, Indiana&#8212;formerly of Schererville, Indiana&#8212;went to be with the Lord at his home on August 4, 2020, surrounded by his loving family. He is survived by his wife of 55 years, Martha Wasson; his daughter,... View Obituary & Service Information

The family of Dennis Wasson created this Life Tributes page to make it easy to share your memories.

Send flowers to the Wasson family.