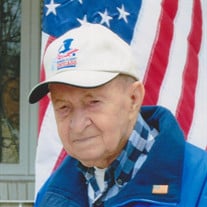 Donald (Don) F. Snell, Sr. 93, of Crown Point, Indiana entered into eternity on Thursday morning, July 27, 2017. He was diagnosed with Prostate Cancer that had spread to his spine this July. He was told he would never walk again and that same day entered Riley Memorial Hospice. Scarcely two weeks later, he entered into eternity with his God. His race finished. He was preceded in death by his wife of 60 years, Emmagene (White) Snell; his mother, Stella Curts; father, Fay Kelly; and four brothers and sisters: Bonnie Howe, Robert Brown, Charles Brown and Delores Studle. He is survived by his wife of 13 years, Gail; his children: Donald Snell Jr. (Louise) of New Mexico, and Trudy Glover (Voyle) of Indiana. He was the loving grandfather to Samuel Glover (Rena) of Indiana, Sarah Humber (Phil) of Indiana, Lydia Glover of Arizona, Donel Judy (Matt) of Alaska, and Valerie Wilson of Arizona; Great grandchildren: Logan Glover, Emily Glover, Charleen Humber and Brianna Humber all of Indiana. Also, sisters: Norma (Brown) Stowers of Frankfort, Indiana, WIlma Pippinger of Frankfort, Indiana, and Delores Studle of Kentucky; step-children: Beverly Blamer of Michigan, Linda Hoiseth (Steve), Debra McCoy (Forrest), Lawrence Parsons and Thomas Parsons all of Indiana; and 17 Step-Grandchildren and 8 Step-Great Grandchildren. Don served proudly in the Army for WWII in the 3rd Army under General Patton (Top Dog), 87th Infantry Division, 336 Field Artillery Battalion, Field Service Battery. Don served as a forward observer relaying coordinates for destruction of the German tanks and positions. He marched across Europe, fighting at the Battle of the Bulge and many other battles with the Germans. He was a rifleman serving as a “sharp shooter” because of his skill with a rifle. He helped in the liberation of Jewish Concentration Camps and was the recipient of several medals. For many years, Don and Jean attended the Lyndhurst Baptist Church in Indianapolis, Indiana and the First Baptist Church of Tucson, Arizona. At his death, he was a member of the Lake Hills Baptist Church in Schererville, Indiana. A viewing will be held on Tuesday, August 1, 2017 from 10:00 a.m. - 12:00 p.m. at the Memory Lane Funeral Home, 6305 W. Lincoln Highway (US 30), Crown Point, Indiana. The funeral service will immediately follow beginning at 12:00 p.m. with burial to follow. Please contact the funeral home for further information (219) 322-2050. You may leave condolences or order flowers on the website: www.memorylanepark.com

Donald (Don) F. Snell, Sr. 93, of Crown Point, Indiana entered into eternity on Thursday morning, July 27, 2017. He was diagnosed with Prostate Cancer that had spread to his spine this July. He was told he would never walk again and that same... View Obituary & Service Information

The family of Donald F. Snell created this Life Tributes page to make it easy to share your memories.

Send flowers to the Snell family.