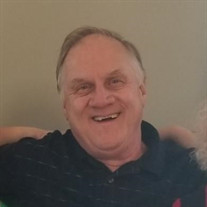 Donald Alan Stone, age 69, of Lowell, Indiana, passed away unexpectedly on Wednesday, July 31, 2019. He is survived by his wife of 26 years, Barbara Stone; his children: Rebecca Stone-Dewey, Andrew (Kathryn) Stone, Karen Hogancamp, and Steve (Audrey) Sack; his 9 grandchildren and 3 great-grandchildren. Donald is also survived by his siblings: Robert (Marilyn) Stone, Larry (Angie) Stone, his twin brother, David (Dana) Stone, Pam (Bob) Christensen, and Ronald Stone. He was preceded in death by his parents: Robert & Marie Stone, his stepdaughter: Barbie Parnow, and his in-laws: John & Bertha Hinman. Donald worked for many years as a Railroad Engineer for Illinois Central. He also is a Navy Veteran. Donald was a member of the Bethel Church in Cedar Lake, Indiana and served the Lord as a deacon. His selfless and giving spirit was evident in his life as he helped numerous people during his lifetime. You could say that “living for others” was his motto. A visitation will be held on Tuesday, August 6, 2019 from 1:00 – 4:00 p.m. at the Memory Lane Funeral Home, 6305 W. Lincoln Highway (US 30), Crown Point, Indiana. The funeral service will immediately follow at 4:00 p.m. with an entombment after the service at Memory Lane Memorial Park. In lieu of flowers, donations may be made to the Alzheimer’s Association: www.alz.org/donate For further information, please call the funeral home office (219) 322-2050. www.memorylanepark.com

The family of Donald Alan Stone created this Life Tributes page to make it easy to share your memories.

Send flowers to the Stone family.