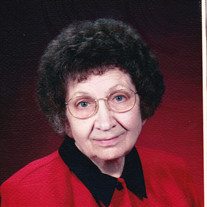 Donna Mae Sprunger, 88, of Schererville, Indiana, went to Heaven on Tuesday morning, January 21, 2020. She is survived by her daughters: Rebecca (Jay) Towne and Rhoda (Robert) Smith II; four grandchildren: Ashley (Gabe) Allec, Laura (John) Barnes, Robert Smith III, and Rebecca Smith; and two great-grandchildren: Stephen and Kingsleigh Barnes. Donna Mae is also survived by her brother, Logan Sprunger; her sister-in-law, Carol Sprunger; and many nieces and nephews. She was preceded in death by her husband of almost 66 years, Samuel Frank Sprunger; her parents, Clarence & Lorine Sprunger; and her siblings: Jean Habegger, Juanita Herman, Jacqueline Burnett Smith, and Delbert Sprunger. Donna Mae was born on July 21, 1931 in Berne, Indiana, the fifth of six children to Clarence and Lorine (Habegger) Sprunger. She graduated from Berne French High School in 1949, and went to Bob Jones University in Greenville, South Carolina. Donna Mae married her high school sweetheart, Sam, on September 2, 1951 at the First Mennonite Church in Berne, Indiana. After they were married, they took their first pastorate at the Saucon Mennonite Church in Coopersburg, Pennsylvania. Throughout all four churches that her husband pastored, Donna Mae was a true helpmeet to her husband as she served with him in the ministry as a church pianist, church secretary, member of the church choir, and of course, the pastor’s wife. In 1976, Sam and Donna Mae moved their family to Hammond, Indiana, where they joined the First Baptist Church of Hammond, Indiana, and have been members ever since. Donna Mae worked in the church bed-baby nursery (ages 0-6 months) and the 2-year-old Sunday School department for over 35 years. Donna Mae loved her family and was happy being a wonderful housewife and mother. She truly epitomizes Proverbs 31:28, “Her children arise up, and call her blessed; her husband also, and he praiseth her.” A viewing will be held on Thursday, January 23, 2020, from 11:00 a.m. – 1:00 p.m. at Memory Lane Funeral Home, 6305 W. Lincoln Highway (US 30), Crown Point, Indiana. The funeral will immediately follow at 1:00 p.m. with an entombment to follow. For further information, please contact the funeral home (219) 322-2050. www.memorylanepark.com

The family of Mrs. Donna Mae Sprunger created this Life Tributes page to make it easy to share your memories.

Send flowers to the Sprunger family.