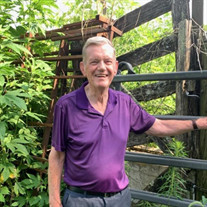 At 2:50 pm on March 17, 2022, Edgar Raymond Gilbert, at the age of 77, ran into the arms of his life-long Savior and Friend, Jesus Christ. Edgar was born to Raymond and Beulah Gilbert on August 26, 1944 in Burke, South Dakota. He is survived by his cherished wife of 59 years, Martha Gilbert; his adored sisters, Carolyn Gilbert Reed and Helen Gilbert Letterman; his two beloved children, Susan Gilbert Aubrecht (Steven Aubrecht),and Mark Gilbert (Laura Gilbert); and his three spoiled grandchildren, Sabrina, Shayla, and Skyler Aubrecht. At the age of eight, Ed and his family moved from South Dakota to a farm near Willard, Missouri where he remained until he was an adult. There he helped his family work the farm, raise crops, cattle, and hogs. He went to the local schools with his classmates, including Martha Jane Killingsworth. They began dating in November of 1962, were engaged by Thanksgiving, and, as two eighteen year old kids, eloped to be married on February 15, 1963. Although raised faithfully in a small country church, after marriage and a change in churches, Ed came to realize his need for a Savior. After discussing his need with Martha they both knelt at their living room couch and he prayed and accepted Christ. Ed felt the call of God on his life shortly after, and he and Martha began to attend Baptist Bible College in Springfield Missouri. He graduated in 1967; however, Martha took on more than classes with the birth of their two children Susan and Mark. In 1968, Ed felt the call to go back to his home state of South Dakota and plant Bible Baptist Church, which he pastored for five years. The family began to sing together, largely due to a need for special music in their little church and it became a hallmark for their family for decades to come. He also began to work as an optician for the Bausch and Lomb Company, an occupation which continued to support his family until he retired in 2019. He pastored in Omaha, Nebraska and Denver, Colorado, as well. In 1975 the family returned to Nebraska to the small town of Louisville. There Edgar helped to start and principal the Faith Christian School. The unaccredited school became a battleground for the freedom of parent's choice to decide where and how to educate their children, and Ed was under warrant for arrest for the school’s stand. He was determined to stand for his Christian beliefs, and because of him and steadfast parents, the state lost their case and Christian parents kept their right to choose. Ed decided to move the family to Hammond Indiana in 1979. He attended Hyles-Anderson College and received his Pastor's Refreshers degree as well as his Master's degree. He loved Bro. Hyles and the things he learned here. In 1983, Ed, Martha, and Mark moved to Odessa, Texas where Ed helped as the associate pastor of Bible Baptist Church. But Ed’s love for the ministry here in Hammond called him back to the area in 1986, and he remained here for the next 36 years. He continued to be involved in the ministry as a layman, while working a minimum of two jobs throughout his adult life, but maintaining his church involvement with teaching Sunday school, working the bus route, singing in the “infamous bass section” that Bro. Hyles loved to razz so much, and helping in multiple Pastor’s Schools, etc. Although he left the farm as a young man, the farmer’s heart never left him. His pride and joy was his father’s F-30 Farmall tractor, which he proudly drove up and down his quiet street in Hobart, and relished showing people every detail of its mechanics, as well as giving rides whenever he got the opportunity. He loved woodworking and became a master craftsman. His pieces grace the homes of his family and will be a great reminder of his love for them. But his family was by far his greatest treasure, and he supported and loved them with every fiber of his being. No occasion was too small, no sacrifice too great. You knew you could count on him like the sun rises and sets. Everyone he met was better for it and felt his kindness, love and care. His constant unsung, quiet character, steadfastness, strength, and endurance through every life situation is what will be remembered most. Most of all, his love for his Savior was unmatched. Not a day went by that he did not spend time with the Lord, and it was so evident in everything he did. His Holy-Spirit led life was a challenge to others. Down to the last hours of his life, with the pangs of cancer and the pain of dying, he never once complained, but sang praises to the One who ultimately healed him and welcomed him with open arms to that sweet eternal rest. Visitation will be held on Friday, March 25, 2022 from 10 a.m. to 12 p.m. with a service following at 12 p.m. at Memory Lane Funeral Home 6305 W. Lincoln Hwy Crown Point, Indiana 46307. Interment to follow.

At 2:50 pm on March 17, 2022, Edgar Raymond Gilbert, at the age of 77, ran into the arms of his life-long Savior and Friend, Jesus Christ. Edgar was born to Raymond and Beulah Gilbert on August 26, 1944 in Burke, South Dakota. He is survived... View Obituary & Service Information

The family of Edgar Gilbert created this Life Tributes page to make it easy to share your memories.

Send flowers to the Gilbert family.