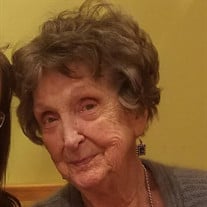 Elaine F Bell (nee McKown), age 89, of Hebron, IN, passed away on Sunday, October 21, 2018. She was born on April 13, 1929 in Hammond, IN to the late Buren and Ruth (nee Myers) McKown. She was retired from Illinois Bell and Mary Kay. She loved... View Obituary & Service Information

The family of Elaine Florence Bell created this Life Tributes page to make it easy to share your memories.

Send flowers to the Bell family.