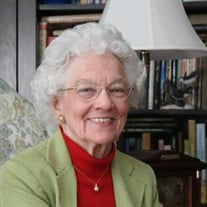 Erma McKinney, age 90, of Dyer, went home to Heaven on Friday, September 1, 2017. Erma was born September 27, 1926, to Fay and Hazel Ault, was first brought to the First Baptist Church of Hammond at age 4, and after having accepted Jesus as her personal Saviour, was baptized (along with her identical twin sister) and made a member of the church at the age of 9. She began teaching Sunday school as a teenager, was a member of the church choir, and superintended (as “Miss Erma”) the Beginner 2 Sunday school department (5-year-olds) for over 50 years. Erma graduated from what is now Thornton Fractional North High School where she participated in speech and debate. She also attended Gordon College in Boston, Massachusetts where she majored in theology. After marrying her childhood sweetheart, Tom McKinney, in 1948, she worked for Queen Anne Candy Company, for IBM, and then for the IBM installation of Edward Valves, part of Rockwell Industries. In 1965, she became a member of the staff of the First Baptist Church of Hammond, where she authored the children’s Sunday school lessons and was the pastor’s secretary for over 40 years until she retired at the age of 85. She is survived by her two children and their spouses: Phil and Gail Merhalski of Schererville, and Keith and Lynn McKinney of Dyer. She had four grandchildren: Justin McKinney of Spokane, Washington; Heather (Carlos) Berrones of Hammond; Adam (Atina) Merhalski of Hammond; and Abbey (Scott) Sloan of Highland. She also had five great-grandchildren to whom she loved to read: David, Mark, Maegann, and Anthony Merhalski; and Lilyanna Berrones. She is also survived by her twin sister, Evelyn Paul of Smoaks, South Carolina; and her brothers: Wayne Ault of Sister Bay, Wisconsin, and Leonard Ault of Fort Collins, Colorado. Erma was preceded in death in 2003 by her husband. Friends are invited to visit with the family on Thursday, September 7, 2017 from 6:30 - 9:00 p.m. at the Memory Lane Funeral Home, 6305 W. Lincoln Highway (US 30), Crown Point, Indiana. A funeral service will be on Friday, September 8, 2017 at 11:00 a.m. at the funeral home with a one-hour viewing prior to the service. In lieu of flowers, memorial donations for the Hammond Baptist Schools’ library are requested. For further information, please call the office (219) 322-2050 or visit the website: www.memorylanepark.com

Erma McKinney, age 90, of Dyer, went home to Heaven on Friday, September 1, 2017. Erma was born September 27, 1926, to Fay and Hazel Ault, was first brought to the First Baptist Church of Hammond at age 4, and after having accepted Jesus as... View Obituary & Service Information

The family of Mrs. Erma Mae McKinney created this Life Tributes page to make it easy to share your memories.

Send flowers to the McKinney family.