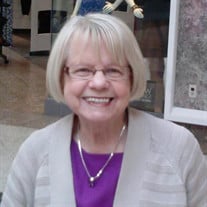 Fay Dodson was born on March 28, 1939 in Drakesboro, Kentucky to John Clark Wilson and Elizabeth Doll Wilson. She grew up the youngest of seven children in her family: four girls and three boys. Fay went to be with Jesus on Saturday, November 28, 2020. Fay Dodson was the ideal of what a soul winner should be. She became a member of First Baptist Church of Hammond, Indiana in 1964 after her two sons, Rick and Alan had ridden a bus to Sunday School. There she grew a bus route from one to three buses walking many a convert down the aisle. Under the direction of the pastor, Bro. Hyles, she founded Phoster club, a ladies’ soul-winning group. She molded Phoster Club to train ladies to be not only soul winners, but also trainers. The number of souls who have been and will be reached for Jesus is countless. Throughout the years, Fay Dodson has personally led over 27,000 people to the Lord. The Phoster Club ladies at First Baptist Church of Hammond, Indiana have been responsible for leading more than 500,000 people to Christ. She was never afraid to tell someone about Jesus, no matter how tense the situation became. To this day, hundreds of souls are being led to Christ by Phoster Club ladies all across the United States and in several foreign countries every week. Lou and Fay were married in 1974 after being introduced by Bro. Hyles. Together, they shared 36 years in marriage. She was a devoted wife, mother, and grandmother. She had a witty sense of humor and enjoyed playing pranks on her greatest pride and joy. During her many travels, she would love to bring her grandchildren to share wonderful experiences together. She was always thinking of other and giving gifts to those she cared for, and also giving food to the homeless. When you were with Fay, you were with a true friend. She leaves her son, Alan Meredith; daughter in law, Theresa Meredith; grandchildren, Robby Olen, Christopher Meredith, Steven Meredith, Nicole Meredith, Shane Meredith, and Trevor Meredith; and great-grandchildren Skyler Olen, Vada Meredith, Xander Olen, Silas Olen, Ryan Meredith, Sully Meredith, Jordan Kramer, and Leo Olen. She rejoins her husband Lou Dodson and her son Rick Meredith. Philippians 2:15 “That ye may be blameless and harmless, the sons of God, without rebuke, in the midst of a crooked and perverse nation, among whom ye shine as lights in the world;” A private graveside service will take place on Wednesday, December 2, 2020 with interment to follow at Memory Lane Cemetery 6305 West Lincoln Hwy Crown Point, IN 46307. A memorial service will be held on Monday, December 7, 2020 at 11 a.m.

Fay Dodson was born on March 28, 1939 in Drakesboro, Kentucky to John Clark Wilson and Elizabeth Doll Wilson. She grew up the youngest of seven children in her family: four girls and three boys. Fay went to be with Jesus on Saturday, November... View Obituary & Service Information

The family of Fay Dodson created this Life Tributes page to make it easy to share your memories.

Send flowers to the Dodson family.