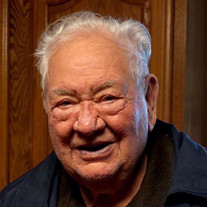 Mr. Gene Carrico, age 92, of Merrillville, Indiana, (formerly of Chicago, Illinois), passed away at home on Friday, August 3, 2018. He is survived by his daughter, Barbara Freeman; his 5 grandchildren: Gregory (Mali) Freeman of Crown Point, IN, Gene (Christina) Freeman of Crown Point, IN, Melissa (Edward) Santos of Hobart, IN, Barbara Jean (Agapito) Rodriguez of Crown Point, IN, and Catherine (Daniel) Wells of Valparaiso, IN; and his 15 great grandchildren and another great granddaughter due in just 2 weeks. Gene’s wife, Catherine Carrico, preceded him in death in 2009. He is also survived by his sisters: Betty and Dortha, and his brother, Truman. Gene proudly served in the United States Army during World War II. A visitation will be held on Wednesday, August 8, 2018 from 12:00 – 2:00 p.m. at the Memory Lane Funeral Home, 6305 W. Lincoln Highway (US 30), Crown Point, Indiana. A Celebration of Life service will begin at 2:00 p.m. at the funeral home. Immediately following the service, Gene will be buried with full military honors in the Veteran’s Section of Memory Lane Memorial Park cemetery. You may contact the funeral home for further information: (219) 322-2050. www.memorylanepark.com

The family of Gene Carrico created this Life Tributes page to make it easy to share your memories.

Send flowers to the Carrico family.