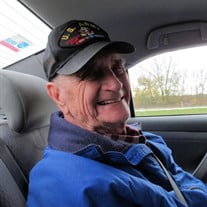 Gerald (Jack) Goglin was born on April 26, 1930, in Faulkton SD. Jack lost his father when he was only eight years old but was surrounded by extended family in his early years. He had to leave school in the eighth grade to help his mother raise him and his two brothers. In later life, Jack finished his education by receiving a GED. As a child, he lived through the Dust bowl, World War II and Pearl Harbor. When Jack was in his early teens, he was sent to live on his Aunt Rose Web’s farm outside of Harold SD. He learned how to work hard on the farm and respect the land and all animals. In 1947, when Jack was just 17, his mother reluctantly signed Jack’s enlistment papers into the United States Army--where he continued his financial support to her by sending monthly checks. Jack was one of the first men sent to fight in Korea and served under General MacArthur helping to stop the communists from crossing the 38th parallel into South Korea. When his time in the military ended, Jack returned home to Pierre SD and fell in love at first sight with Marlene Burton. After a few months of courting, they married at the local First Methodist Church on August 3rd, 1952. Jack and Marlene raised six children as Christians and educated them in Pierre public schools. After all the children were grown, Jack and Marlene moved in 1993 to Sun Lakes AZ. They moved again around 2014 to be nearer to daughter Susan in Hammond IN, where she and her family took care of and supported them during their final years. Jack worked for the United States Postal Service for more than 30 years. He was known as “Happy Jack” by all the people on his mail delivery route. Jack was compelled to become a volunteer fireman after his mother and two oldest children were saved by firemen when their home caught on fire. He fought fires in the town of Pierre for more than 17 years. Jack felt that serving his church community was important and was actively involved by being a Sunday School teacher as well as a church fundraiser. Jack was a great father to his children and always stayed involved in their activities. He taught them how to fish, hunt and drive and helped them buy their first cars. He was a pack leader for his son’s boy scouts, coached his kid’s baseball teams, and even led son Gary’s team to a championship. Jack loved his family and children, all animals, the outdoors, gardening, fishing, hunting, camping, and playing games like cards, chess and checkers. Jack’s accomplished life will be forever cherished by his six children: Susan Cowman, Geraldine Williams, Connie McGruder (deceased), Mike Goglin, Gary Goglin (deceased), and Terry Goglin. Others privileged for having shared his life were his father, late Henry (Hank) Goglin, his late mother Lena Rickles Goglin Kegler, and his two brothers Howard and Marvin Goglin (both deceased). He has 13 grandchildren and 24 great grandchildren.

Gerald (Jack) Goglin was born on April 26, 1930, in Faulkton SD. Jack lost his father when he was only eight years old but was surrounded by extended family in his early years. He had to leave school in the eighth grade to help his mother raise... View Obituary & Service Information

The family of Gerald "Jack" Goglin created this Life Tributes page to make it easy to share your memories.

Send flowers to the Goglin family.