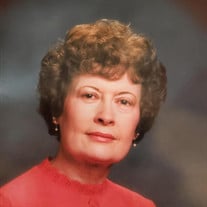 Ilene Hall, 93, of Munster, Indiana, passed away Friday, April 3, 2020. Ilene was born on September 15, 1926 in Rensselaer, Indiana, the middle child of three to Worth & Gladys Johnson. She was raised in a fundamental, United Brethren Church, and made a public profession in that church at the age of six. Immediately upon her graduation from high school at age 16, her family moved to Hammond. Her father worked at Inland Steel, and Ilene’s only brother enlisted in the Eighth Air Corps. Howard’s plane was shot down over Germany where he was a prisoner of war for several months until liberated by the English Army. Ilene’s family joined FBC in 1944; her father served as a custodian at the church for a few years before moving to Crete, Illinois. Ilene met a group of young ladies at the church, including Ethel Hamacher, Leona Hall, Erma & Evelyn Ault, Millie Lamprecht, and Shirley Alley, and joined them singing in the choir and attending BYPU led by Art & Janet Schneider. Before long, her Sunday school teacher, Mrs. Kimbrough, and Ethel questioned Ilene about her salvation; she soon got the assurance of her salvation and was baptized by then FBC pastor, Dr. T. Leonard Lewis. Ilene then started teaching in the Junior Department under Mr. Blanford Duff. Ilene and Leona Hall often worked together and got to know each other’s families. Ilene noticed Steve's picture on the piano in the Halls' living room. Steve was already fighting in Europe, and Mrs. Hall asked Ilene to write Steve; Ilene said that Steve would have to write first. He did. Steve Hall was born in East Chicago, the eldest of two children born to Coleman and Mary Hall. His sister, Leona, would later marry Don Krueger. Steve’s dad worked as an inspector on the New York Central Railroad. Steve’s parents were active members of FBC when Steve was born. He and Tom McKinney joined the Cradle Roll Department the same year. Steve was saved as a child here at FBC and played softball and basketball on the church teams. Steve’s mother was a member of the Faithful Workers group that made quilts and clothing for the needy, and during World War II, wrapped bandages and saw to the needs of our servicemen. Ilene and Mrs. Hall were very close; Ilene often expressed that she was fortunate to have two mothers. Mrs. Hall, although in very bad health, managed to live for others in spite of her condition. Steve enlisted in the Army at the age of 18 and fought in the European theater. He recalled how he could feel the power of the prayers of his family and of the church family while he was in battle. He was so impressed with and was thankful for Dr. Purdy's personal interest in a boy he had not yet met. After returning from overseas, Steve met Ilene for the first time. They dated occasionally, then periodically, then steadily. A good portion of their dates were before and after church services. They were married on November 22, 1947. They honeymooned in Detroit. While there, they called Mrs. Kimbrough, who was living in Detroit by that time. She mentioned that Ethel Hamacher needed to return to Hammond from Detroit where she was attending Bible College. At the end of their honeymoon, they gave Ethel a ride home, giving Ethel the opportunity to tell everyone that she was with Steve and Ilene on their honeymoon. After Ilene and Steve married, they joined the Challengers Sunday School Class for young married couples. They were active in all their functions, although only Steve attended since Ilene was teaching Junior girls. Steve was an officer of the class. Steve drove one of the church buses for about ten years, picking up children and adults on a route in South Hammond and Hessville. Some of his steady riders included John Vaprezsan and his family, including his two nieces, Helen and Marge (Bill Hasse) Nagy. In 1952, Ilene and her sister-in-law, Mrs. Don (Leona) Krueger, began teaching Sunday school in the Beginner II Department, where she continued to teach and to lead the Beginner II Story Hour. Ilene was a member of the choir since she was a teenager. Steve served on several church committees in years past, ushered in the church for many years, and served on the Deacon Board. Steve retired from the oil industry after 41 years. Ilene was a personal secretary to an officer of Rockwell International for almost 50 years. Most recently, with both first-spouses already in Heaven, once brother-in-law and sister-in-law, Don Krueger and Ilene Hall were married on June 28, 2019. Although she never had children of her own, she influenced little children for nearly seven decades. Ilene was a life-time member of the First Baptist Church of Hammond, Indiana. She is survived by her husband, Donald Krueger; and her sister, Deloris (Norman) Blievernicht of Crete, Illinois. She is also survived by her nieces: Janet (Ken) Tomcsi of Schererville, Indiana; Beth (Peter) Schmugge of Marana, Arizona; Lynette Blievernicht of Waukesha, Wisconsin, and Carole Lawton of Pacific Grove, California. She is survived by her nephews: Barry (Kim) Blievernicht of Mound, Minnesota, and Matthew (Tina) Blievernicht of Lowell, Indiana. She is also survived by her great nieces and nephews: Paige Schmugge, Mikayla Blievernicht; Stephen (Mallory) Bozovic, Luke Blievernicht, Justin Blievernicht and Travis Blievernicht. She was preceded in death by her parents: Worth and Gladys Johnson; her first husband, Stephen Hall; and her nephew, Mark Blievernicht. The family will have a private family-only funeral service on Friday, April 10, 2020 at Memory Lane Funeral Home, 6305 W. Lincoln Highway (US 30), Crown Point, Indiana. For further information, please contact the funeral home (219) 322-2050. www.memorylanepark.com

Ilene Hall, 93, of Munster, Indiana, passed away Friday, April 3, 2020. Ilene was born on September 15, 1926 in Rensselaer, Indiana, the middle child of three to Worth & Gladys Johnson. She was raised in a fundamental, United Brethren Church,... View Obituary & Service Information

The family of Ilene Hall (Krueger) created this Life Tributes page to make it easy to share your memories.