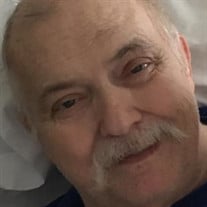 James Franklin Curtis, Sr., 73, of Hammond, Indiana, passed away peacefully surrounded by his family on Friday, December 1, 2017. He is survived by his wife, Catherine Curtis; his children: James Michael of California, Megan (Christopher) Gomez of Hobart, IN, Jami (Peter) VanDyken of Galesburg, IL, and James Franklin Curtis, Jr. of Hammond, IN; and his grandchildren: Juliet Alexander of Kentucky, Noah, Claire, and Allison all from Indiana. James served in the U.S. Marine Corps during Vietnam as well as the U.S. Air Force and reserves for many years. He was a career police officer for 31 years having served in Kentucky, Florida and at the University of Chicago. He retired from the University of Chicago due to declining health issues, and his wife took care of him for the better part of 20 years. He was a devoted husband, father and Papaw. A viewing will be held on Friday, December 8, 2017, from 4:00 - 8:00 p.m. at the Memory Lane Funeral Home, 6305 W. Lincoln Highway (US 30), Crown Point, Indiana. The funeral will be on Saturday, December 9, 2017 at 10:00 a.m. at the Memory Lane Funeral Home. Burial will immediately follow the service in the Veteran’s Section of Memory Lane Memorial Park, Crown Point, Indiana. Flowers may be ordered and condolences left on the website: www.memorylanepark.com Please call the office for further information (219) 322-2050.

The family of James Franklin Curtis Sr. created this Life Tributes page to make it easy to share your memories.

Send flowers to the Curtis family.