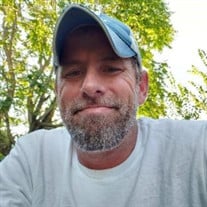 Jason Robert Hopkins Sr., age 40, passed away on January 26th, 2021. He was born on July 23, 1980 in Hammond , Indiana and raised by two sets of loving parents. His mother Tina M. Chyzy-Holtz and her husband Ralph “Buz” Holtz and his father Robert “Jay” Hopkins and his wife Deborah Johnson. Jason was a carpenter by trade working with ASG Roofing & Remodeling out of Hammond, Indiana. Jason fell in love with and married his high school sweetheart, Jennifer L. Lively in August of 2004. Together, they resided in the Chicagoland-Northwest Indiana Region until they settled to make their home in Chesterton, Indiana for their three beautiful children. Jason was a boisterous character and loved to make people laugh. He was never shy about voicing his views on life in general. He lived his life by putting family first, while still enjoying many hobbies, groups, and organizations. Amongst them, he was a Free Mason, a League Bowler, loved to golf outside as well as electronic golfing through Golf Clash. Most will remember Jason for his passion of music and rock bands. He was a self-taught guitarist and drummer, in which his talent shined through as a vocalist and bass player with a local band, Awkward Nation. His energy and love of live was infectious. A very proud family man. It will certainly be a dimmer world without him. Preceding him in death was his stepfather, Ralph “Buz” Holtz in Spring 2020; his two stepbrothers, Brad Holtz in July 1999, and Scott Holtz most recently on New Years Day, 2021. He is survived by his wife, Jennifer; their three children, Jessica, Jason Jr., and Janis; his mother, Tina Holtz; his father, Robert “Jay” Hopkins; his brother Joshua Hopkins and Josh’s family including Josh’s mother Deb Johnson and her three daughters, Renee, Britley, and Brianna. Visitation will be held from 10 a.m. to 12 p.m. at Memory Lane Park Funeral Home 6305 W. Lincoln Hwy Crown Point, Indiana on Thursday, February 4, 2021, with services for Jason beginning at 12 p.m., and burial immediately following. Any memorial donations will be accepted through a GoFundMe Page set up by family for Jason at https://www.gofundme.com/f/u4kku-jason-hopkins-memorial-fund

The family of Jason Hopkins Sr. created this Life Tributes page to make it easy to share your memories.

Send flowers to the Hopkins family.