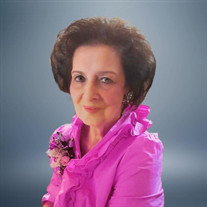 Jeanette N. Giragos, age 82, of Munster, Indiana, passed from this earthly life on Sunday, October 24, 2021. She was preceded in death by her brother Edward F. Veisberg, mother Natalie F. Veisberg, and husband of 46 years Dr. Henry G. Giragos. She is survived by her devoted daughter Renee Jeanette Giragos; loving sister Tamara M. LaFoe; caring nephew and godson Edward W. Veisberg, and nephew Robert Perry; faithful nieces Galina Kuhl, Joy Jeanette LaFoe, and Tasha Singleton; and numerous great-nieces and great-nephews. Jeanette was born of royal heritage in the Baltic country of Latvia. During World War II as the communist Red Army advanced, she and her mother were forced to flee the country. They did not know they would never return and the suitcases they carried and coats they wore, would be all that would remain for them. Her father, an army officer, was deemed to have been killed in combat. They fled to Germany where they lived in a displaced persons camp for several years. Jeanette's mother remarried, and finally in 1951 when Jeanette was twelve years old, the family arrived in New York aboard the USS General Muir, a retired warship. Jeanette's family lived where her stepfather found work -- Boston, then Milwaukee. In Milwaukee, Jeanette worked at Marquette University during the day and attended night school, tuition paid for by the university. When she interviewed for the job, there were many applicants. Later when she was hired, she asked her boss why he had hired her. His answer stuck with her all her life: He said he knew that he had found a diamond in a coal mine that just needed polishing. Polishing people, in a different way, became one of her life's passions later, as she loved teaching the young, and the older, too, etiquette and table manners. Children she taught became parents who passed down to their children the social graces she had taught them. Jeanette's family, including a younger brother and sister, moved to Chicago. Jeanette became a member of the Latvian honorary sorority, Imeria. Soon Jeanette's mother became head of the household. Jeanette pledged to her mother that she would devote her entire paycheck to caring for the family until she would marry. She ascended the rungs of a university career as she became head secretary of Dental Materials at Northwestern University Dental School to the illustrious Dr. Eugene W. Skinner, who wrote the book on dental materials that was used around the world. Working in this capacity taught her the public relations skills she used so successfully later in life. Jeanette was ready to marry but had not met God's best for her, so she decided she needed a change of scenery. There was no online dating, and she did not drive, so the place of work was really instrumental in whom she would meet. She began working at Presbyterian St. Luke's Children's Hospital in Chicago, and through this position met the man who seven months later would be her husband. Dr. Henry G. Giragos and Jeanette moved to northwest Indiana where he established his successful, pioneering career in the newly emerging field of cardiovascular surgery. Jeanette pursued fund-raising and public relations charity work for the East Chicago Medical Auxiliary and the Northwest Indiana Symphony Orchestra. She served on the Board of Directors of the Women's Association of the Northwest Indiana Symphony Society for many years, and had just completed eight years as Vice President in charge of Membership, the longest anyone had held that title, because under her direction the membership grew by leaps and bounds. Jeanette enjoyed serving on the Board of NWI Parkinsons, Inc for many years, as she had friends who suffered from the disease. Jeanette was honored with numerous awards for her lifetime of volunteer work, such as "Philanthropic Woman of the Year" by ELLE ladies ministry of Family Christian Center. Jeanette was a devout believer in her savior Yeshua. She accepted the Lord as savior at First Baptist Church of Hammond after she was first married. She truly exemplified what it means to take care of the poor and hurting. The bent of her life was to take care of others, and she was generous almost to a fault. If someone had a disaster or unfortunate event happen in his or her life, even if she did not know the person, so often she was there lending help. One of the most poignant legacies she leaves is the love with which she graced us, a love from the Father's heart that remains with us. Celebration of Life service will be held Tuesday, November 2, 2021, at 4:00 p.m. at Family Christian Center in Munster, Indiana, with visitation from 2:30 p.m. to 3:45 p.m., Pastor Stephan K. Munsey officiating. Another Celebration of Life service will be held Wednesday, November 3, 2021, at 12:00 noon at Memory Lane Memorial Park & Chapel in Crown Point, Indiana, with visitation from 10:00 a.m. to 12:00 noon, Pastor Stephan K. Munsey officiating. Donations in her memory may be made to College of DuPage Foundation New Philharmonic Fund, 425 Fawell Blvd., Glen Ellyn, IL 60137, or to Northwest Indiana Symphony Orchestra, 1040 Ridge Rd., Munster, IN 46321.

The family of Jeanette Giragos created this Life Tributes page to make it easy to share your memories.

Send flowers to the Giragos family.