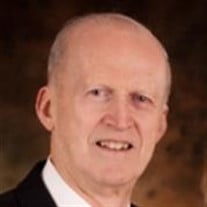 Jerry Horace Smith, age 80, of Schererville, Indiana went to Heaven on Saturday evening, March 23, 2019. He is survived by his wife of 54 years, Doris Smith; his children: Mike Smith, and Dianne (Chip) Dowdey; his grandsons: Chad Dowdey and Ben Dowdey; and his brother, Larry (Bonnie) Smith. He was preceded in death by his parents, Lewis & Evelyn Smith; brothers: Dick Smith and Gale Smith. Jerry grew up in the Elmira, New York area where a visitor came knocking on doors and invited Jerry and his three brothers to go to an independent, fundamental Baptist church. At 11 years of age, he accepted Jesus Christ as Saviour during Vacation Bible School at that church. He and his brothers all went to a Christian college as a result of that person who went door knocking that day and they have all been faithful Christians their entire lives. Upon graduation from college, Jerry was employed by a large public school system in Michigan. He was a teacher for a few years before becoming a principal. As the Christian school movement began to grow, Jerry’s pastor asked him to start a Christian school for his church. Because Jerry and Doris wanted to serve in a church where they could learn to be better soul winners, they visited the First Baptist Church of Hammond, Indiana, and interviewed for a possible position. In 1976, Jerry was asked to come to Hyles-Anderson College to train teachers. For 32 years he taught future teachers and school administrators who were training at Hyles-Anderson College. As Chairman of the Department of Education, he taught a full-time load of classes at the college in addition to spending many hours a week observing and supervising student teachers at Hammond Baptist Schools. Along with these duties, he also played the organ for college chapel. Jerry also had many opportunities of service at the First Baptist Church of Hammond. He was faithful to teach his Sunday school class of second grade boys for many years. Students whose parents were faithful members of the church as well as bus kids from the surrounding area were all visited by Jerry regularly. One particular year he worked hard to corral a class of very unruly boys, and then did his best to see growth in the number of boys reached. One week he made calls, visited in the homes and sent out 40 handwritten postcards, only to find that his attendance went down the very next Sunday. Jerry took comfort and received satisfaction on that Sunday though when one little boy came to Sunday school with his card clutched firmly against him. It was obvious that he had read and reread it as he carried it wherever he went. In addition to his Sunday school work, he played the organ for Preacher’s Sunday school class every Sunday morning before going to his own department to teach. He had other opportunities to serve the Lord musically by singing in the adult choir and in several singing groups. Being faithful to these duties was of prime importance. Jerry was the type of person who showed obvious pleasure in the smallest things. His sister-in-law in Texas once said about him, “Jerry would have fun if you took him to the city dump!” The word “faithful” exemplified Jerry Smith in all area of his life. Whether at home, school, or church, he had one goal: pleasing the Lord! A visitation will be held on Wednesday, March 27, 2019 from 3:00 - 5:30 p.m. at Memory Lane Funeral Home, 6305 W. Lincoln Highway (US 30), Crown Point, Indiana. The funeral service will be at the funeral home on Thursday, March 28, 2019 at 10:00 a.m. with a one-hour visitation prior to the start of the service. Burial will immediately follow the service at Memory Lane Memorial Park. You may contact the funeral home for further information (219) 322-2050. www.memorylanepark.com

The family of Jerry Horace Smith created this Life Tributes page to make it easy to share your memories.

Send flowers to the Smith family.