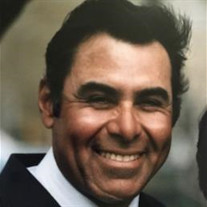 Joel L. Cortina, Sr., 75, of Crown Point, Indiana entered eternal life on Sunday, September 3, 2017 at 1:10 a.m. in the VNA Hospice Homecare, Chicagoland Christian Village, Crown Point, Indiana. He was born as an only child to the late Victoria L. and Servando G. Cortina on March 4, 1942 in Weslaco, Texas. The family moved to Alsip, Illinois in 1954 and Joel attended school in Blue Island, Illinois. He was employed for 42 years in the railroad industry. Joel and Virginia were married July, 27, 1963 in Harvey, Illinois. He was a 30 year resident of Richton Park, Illinois and a member of Saint Lawrence O’Toole in Matteson, Illinois. In 2001, he moved to Crown Point, Indiana, Lake of the Four Seasons, and was a member of Holy Spirit Church. Joel was a talented illustrator and a very creative individual. His skills as an awesome handyman, gardener and cook in the kitchen kept him busy. Action packed movies were his favorite genre, and with his child-like nature he was a great friend to many. He is survived by his loving wife of 54 years, Virginia L. (nee Swick) Cortina; his children: Joel Cortina, Jr. of Scottsboro, Alabama, Victoria Ann (Terry) Jankowski of Valparaiso, Anthony Alan Cortina of Crown Point and Cynthia Lorraine (Larry) Bean of Crown Point. He was a loving grandfather to 12 grandchildren and 8 great grandchildren. He is fondly remembered by many aunts, uncles and cousins who reside in Chicago and Texas. In lieu of flowers, contributions may be sent to the Alzheimer’s Association at http://www.alz.org/ A memorial service will be held on Saturday, September 16, 2017 from 11:00 a.m. to 1:00 p.m. at the Memory Lane Funeral Home, 6305 W. Lincoln Highway (US 30), Crown Point, Indiana. You may leave a condolence and order flowers on the website: www.memorylanepark.com Please call the funeral home office for further details (219) 322-2050.

The family of Joel Cortina Sr created this Life Tributes page to make it easy to share your memories.

Send flowers to the Cortina family.