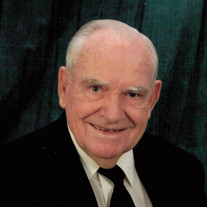 John J. Wagenschutz, 89, of Pellston, MI, went to Heaven on Friday, January 15, 2021. He is survived by his wife of 65 years, Ruby Wagenschutz; children: Timothy (Paula) Wagenschutz of Mazon, IL; Mark (Dawn) Wagenschutz of Superior, WI; Stephen (Donita) Wagenschutz of Longmount, CO; James (Julie) Wagenschutz of Crestview, FL; Eva (Chris) Carr of West Burlington, IA; 17 grandchildren and 12 great-grandchildren and his brother: Wilbur (Carol) Wagenschutz of Marshall, MI; His sisters: Hilda Grossman, Petoskey, MI; Barbara (Floyd) McKaye of Alanson, MI; Dorothy Honeysette of Carp Lake, MI. He is also survived by many nieces and nephews. He was preceded in death by his father, John E. Wagenschutz; Mother, Clara Wagenschutz; brothers: Harold, Richard and Max; Sisters: Ruth, Ruby, Letty Johnson, Joan Steelman and Wilma Powers: Granddaughters; Zoe Carr and Breanna Wagenschutz. John Accepted Christ as his Saviour on March 17, 1950. He was in the United States Army from September 27, 1949 to December 18, 1952. He was honorably discharged as Private First-Class. He attended schools in Petoskey, MI. John received his Bachelor of Divinity Degree from Bible Baptist Seminary of Fort Worth, TX in 1956. He was ordained to the Gospel ministry on April 19, 1956 at the First Baptist Church of Fort Worth, TX. He and Ruby Lee Brown were married on July 3, 1955 in Fort Worth, Texas. He has preached the Gospel since 1950 and from 1956 to 2003, he started two churches and pastored five others in Texas, New Mexico, Illinois and Michigan. He pastored for 30 years at the Flushing Bible Baptist Church now known as North Flushing Baptist Church in Flushing, MI. Since 2003, John has been in evangelism. John spent much of the last 17 years traveling across the United States and other foreign countries conducting Revivals and Mission Conferences. A viewing will be held on Friday, January 22, 2021 from 10:00 a.m. – 11:00 a.m. at the Bible Baptist Church, 8720 Orchard Drive, Highland, Indiana 46322 with the funeral service to follow at 11:00 a.m. The burial will immediately follow the service at Memory Lane Memorial Park Cemetery, 6305 W. Lincoln Highway, Crown Point, Indiana 46307. In lieu of flowers you may send donations to the Mission Funds of the Bible Baptist Church, 8720 Orchard Drive, Highland, Indiana 46322 or First Baptist Church, 401 N. Clinton Street, Dwight, Illinois 60420.

The family of John Wagenschutz created this Life Tributes page to make it easy to share your memories.

Send flowers to the Wagenschutz family.