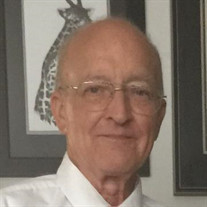 Joseph L. Hackett, Jr., age 78, of Schererville, Indiana, went to be with his Lord and Saviour on Monday, December 23, 2019. The light of day, December 23, 2019 began with Jon stepping on the back porch, for a breath of fresh air, as he started... View Obituary & Service Information

The family of Joseph Leroy Hackett Jr created this Life Tributes page to make it easy to share your memories.

Send flowers to the Hackett family.