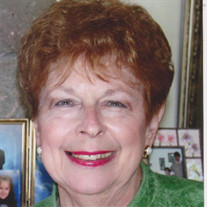 June E. Carrico passed away peacefully on Saturday, April 8, 2017, in Tennessee. She was born on March 23, 1936 in Whiting, Indiana to the late Glenn & Helen (Eggers) Kessler. On June 1, 1957 she married Owen Carrico, Jr., who preceded her in death on March 7, 2015. She was also preceded in death by their son, Thomas L. Carrico in 2014. Mrs. Carrico is survived by her daughter, Jill (Joel) Brandush of Rochester, IN; her son, Dr. David O. (Lisa) Carrico of Paris, TN; five grandchildren: Matt, Mason, and McCall Carrico, Jessica (Matt) Valant, and Jay Groff; and two great grandchildren: Denver Raglin and Alexis Groff. June enjoyed a rewarding career as a legal and then church secretary. She was a long-time member of the Christian Fellowship Church in Hammond, Indiana, but had grown to love her new church home in Paris. She loved to read, play the piano and travel. June was an avid supporter of many animal charities, but she was devoted to St. Jude Children's Hospital. Since moving to Tennessee, she had enjoyed every minute she spent with her two cats, Holly and Sonny. A visitation will be held on Saturday, April 29, 2017, from 10:00 - 11:00 a.m. at the Memory Lane Funeral Home, 6305 W. Lincoln Highway (US 30), Crown Point, Indiana. The memorial service will begin at 11:00 a.m. You may call the funeral home for further information (219) 322-2050. Condolences may be written on the website: www.memorylanepark.com In lieu of flowers, memorials may be made in her honor to the St. Jude Children's Research Hospital, 501 St. Jude Place, Memphis, TN 38105-9959

June E. Carrico passed away peacefully on Saturday, April 8, 2017, in Tennessee. She was born on March 23, 1936 in Whiting, Indiana to the late Glenn & Helen (Eggers) Kessler. On June 1, 1957 she married Owen Carrico, Jr., who preceded her... View Obituary & Service Information

The family of June Ellen Carrico created this Life Tributes page to make it easy to share your memories.

Send flowers to the Carrico family.