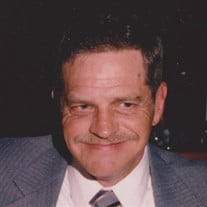 Lawrence “Larry” Chris Poulsen, 80, joined his Saviour and entered his eternal home on Wednesday, September 27, 2017. Larry was born on November 6, 1936, the oldest son of Harold and Florence Poulsen. He had one brother, Jim, and a sister, Joyce, who are still living. He grew up in Hessville, Indiana. The Poulsen children attended the Hessville Baptist Church and Larry was so thankful for the kindness shown to him and his siblings as Christ’s love was shared to them. Larry received Jesus at the age of eight. He remembered one special teacher, Mrs. Carrico, who chose him to be the narrator of a Christmas program which shared the story of Jesus’ birth. It meant the world to him that she told him that he did a great job! Larry attended Morton High School in Hammond. He enjoyed sports and was even voted “Most Valuable Player” on the football team where he played the position of center. One night, during his high school days, Larry attended a roller skating party sponsored by the Youth for Christ where he spied a lovely girl and fell in love with her. Marcia will be to this day the “love of his life.” After high school, Larry joined the US Marine Corp. Before being stationed at Cherry Point, North Carolina, he married the “love of his life.” Marcia and Larry were blessed by God with two sons, Mike and John. After military life, they moved their little family to King Court in Gary, Indiana. During those adventurous years with a young family, Larry worked for a short time at Inland Steel. Then he attended barber school and worked as a barber for six months at Herb’s Barber Shop in Griffith, Indiana. This part of his journey allowed him to meet Carl Sanders who encouraged Larry to become a pipe fitter for Local 597. As a pipe fitter, Larry was well respected and for many years ran jobs for Correct Piping as superintendent or general foreman. Larry retired from pipefitting after 32 years and he enjoyed his retirement. Nearly every day Larry would get up early, get in his truck, meet the fellas at McDonalds for coffee, run errands and visit friends at Walmart and many other places. Larry really knew no strangers. People were drawn to him. He always learned and remembered peoples’ names and was interested in the lives of the people that he met. Larry attended Lake Hills Baptist Church. He made many friends there as well. Rumor has it that he would only stay for services if Pastor Phil was preaching. But you know how rumors go! Larry loved his Saviour, his Bible which he read from cover to cover two times a year, and listened to Bible CD’s each night to go to sleep, along with southern gospel music - especially the Booth Brothers. Larry also enjoyed music, football, tennis, racquet ball, fishing with his family, working on projects for and with his family and neighbors, driving around in his truck, Giuseppe’s Pizza, red jello, whoppers at Burger King, White Castles for breakfast and Blue Bloods. At any time you would find Larry humming or whistling! He would always say, “Life has enough hard things in it all by itself. So laugh whenever you can!” Larry left this world on September 27, 2017 to go to his Saviour and heavenly, eternal home. He was surrounded by his family who cared for him as he courageously fought the disease that filled his body. He showed kindness and love to the very end. Larry is survived by a family who will always love him and miss him terribly. He filled their hearts and lives with his unconditional love. He is survived by Marcia, his wife of almost 62 years (October 15, 2017 being their anniversary); his sons: Mike and his wife Cindy, and their son, Isaac; John and his wife Jennie, and their children: Tom and his wife Alisa, Laurel and her husband Jack, and Jonathan. Larry was the “Grandpa-Great” to Ben, Alexia, James, Alaina, and Eleanore. He taught us so much! He was a great dad, grandpa, neighbor and friend. We thank God for the treasure he was to us – “Big Lar,” the Legend. A visitation will be held on Monday, October 2, 2017 from 10:30 a.m. – 12:00 p.m. at the Memory Lane Funeral Home, 6305 W. Lincoln Highway (US 30), Crown Point, Indiana. The funeral service will begin at 12:00 p.m. (Noon) with burial immediately following at Memory Lane Memorial Park cemetery. Condolences written to the family via the funeral home website: www.memorylanepark.com In lieu of flowers, donations can be made to the Lake Hills Baptist Church in Schererville, Indiana, in honor of Larry. For further information, please call the funeral home (219) 322-2050.

Lawrence &#8220;Larry&#8221; Chris Poulsen, 80, joined his Saviour and entered his eternal home on Wednesday, September 27, 2017. Larry was born on November 6, 1936, the oldest son of Harold and Florence Poulsen. He had one brother, Jim, and... View Obituary & Service Information

The family of Lawrence "Larry" Chris Poulsen created this Life Tributes page to make it easy to share your memories.

Send flowers to the Poulsen family.