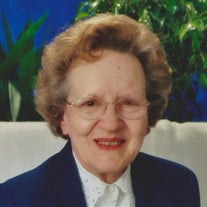 Marilyn (Carter) Mosby, 82, of Crown Point, Indiana (formerly of NW Missouri) entered Heaven on Thursday, January 18, 2018. She was preceded in death by her parents, her husband George (1986), and, recently, her only sibling, Harold Carter (Jan 9, 2018). She is survived by her children: Marchelle (John) Webb, George (Laurie) Mosby, Kimberly (Bill) Green, and John Mosby. She has 8 grandsons and 11 great grandchildren. Marilyn was a preacher’s daughter who married a preacher’s son. Her husband was in the Navy for 10 years and was stationed in California. In 1963, they moved their family back to Missouri where they had lived before the military service and became farmers. Marilyn enjoyed being a homemaker while her children were growing up. Later, she worked as a secretary for an insurance company (Jennings & Associates) in Bethany, Missouri for many years and then as the Director of the Senior Center in Cameron, Missouri until she retired. Marilyn was saved as a young child and spent most of her adult life playing the piano for the churches she attended. Her children sang as a gospel quartet for many years and she managed and played for them, also. She was a member of the First Baptist Church of Hammond, Indiana. A viewing will be held on Saturday, January 27, 2018 from 10:00 - 11:00 a.m. at the Memory Lane Funeral Home, 6305 W. Lincoln Highway (US 30), Crown Point, Indiana. The funeral service will immediately follow at 11:00 a.m. A burial will take place on Monday, January 29, near Princeton, Missouri.

Marilyn (Carter) Mosby, 82, of Crown Point, Indiana (formerly of NW Missouri) entered Heaven on Thursday, January 18, 2018. She was preceded in death by her parents, her husband George (1986), and, recently, her only sibling, Harold Carter (Jan... View Obituary & Service Information

The family of Marilyn Mosby created this Life Tributes page to make it easy to share your memories.

Send flowers to the Mosby family.