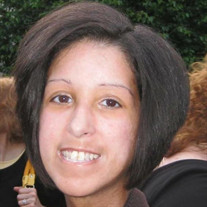 Merlinda Arroyo, 34, passed away on Friday evening, December 9, 2016, at St. Catherine's hospital in East Chicago, Indiana, after battling a long illness. Surrounded by family, she went to be with her Lord and Saviour at 11:45 p.m. Merlinda was born on August 1, 1982 in Chicago, Illinois to Andrea Gonzalez and accepted Christ as her personal Saviour as a teenager. In 1997, her family moved to East Chicago, Indiana, and she attended Hammond Baptist School that fall. She enjoyed learning how to cook and was part of the cheerleading squad. As an adult, Merlinda worked in the Finance office at the First Baptist Church of Hammond from 2007 until 2013 where she was no longer able to work due to her ailment. She enjoyed watching sports and was excited when she saw the Cubs win the World Series. She loved to watch TV shows, movies, listen to music and play Candy Crush. Her favorite time was spent with her children as they read to her. She will always live in the hearts and memories of her surviving family members which include her children: Angelo, Isabella and John Arroyo; Mother: Andrea Gonzalez; Grandparents: Ana and Jose Berrios; Great grandmother, Aurea E. Galletti; Uncles: Hector Garcia, Antonio Sanchez, Humberto Otero, John Arroyo; Aunts: Mirian Garcia, Aurea Otero, Teresa Arroyo, Violette Arroyo, Ruthie Arroyo; Cousins: Antonio Alicea, Della Wolverton, Antonio Sanchez Jr., Elena (Garcia) Roman, Jasmine (Garcia) Velasquez, Ana Garcia, Lilly Garcia, Joe Arroyo and Nick Arroyo; Various great aunts, uncles, cousins and friends. A viewing will be held on Tuesday, December 13, from 5:00 - 8:00 p.m. at the Memory Lane Funeral Home, 6305 W. Lincoln Highway (US 30), Crown Point, Indiana. The funeral will be on Wednesday, December 14, 2016 at 11:00 a.m. at Memory Lane Funeral Home with a one-hour visitation prior to the start of the service. Pastor John Wilkerson will be officiating. Please contact the funeral home for further information (219) 322-2050. www.memorylanepark.com

Merlinda Arroyo, 34, passed away on Friday evening, December 9, 2016, at St. Catherine's hospital in East Chicago, Indiana, after battling a long illness. Surrounded by family, she went to be with her Lord and Saviour at 11:45 p.m. Merlinda... View Obituary & Service Information

The family of Merlinda Arroyo created this Life Tributes page to make it easy to share your memories.

Send flowers to the Arroyo family.