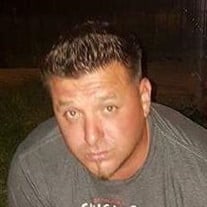 Michael R. Eby, age 42, of Cedar Lake, Indiana, passed away unexpectedly at his home on Tuesday, September 25, 2018. He is survived by the love of his life, Amanda Eby; his children: Jacquelyn Lux, Michael A. Eby, McKenzie Eby, Cody Eby,... View Obituary & Service Information

The family of Michael Richard Eby created this Life Tributes page to make it easy to share your memories.

Send flowers to the Eby family.