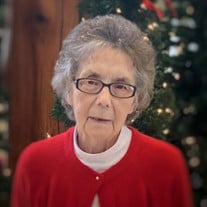 Nan Davis was born on September 29, 1935 in Bybee, Tennessee. She went to Heaven on August 13, 2021. She was the daughter of Jake and Arie Holt and had 6 brothers and 1 sister. Nan outlived all of her siblings. She is survived by her son, Jim Davis and his wife Pam; her daughter, Barb Burke and her husband Paul; her granddaughter, Heather; her granddaughter Ashley and her husband Eric; and her great-grandson Landon. Nan was raised on a farm in Tennessee. Her family were members of Liberty Hill Baptist Church in Bybee, Tennessee and her dad was a deacon in the church. As a teenager, during a Sunday morning service, she accepted Jesus Christ as her personal Saviour. Work was hard to find in those days, so Nan, her sister, and a brother or two moved to Cleveland, Ohio. Nan began waitressing in a local diner. In March of 1955, a young soldier named Sanford Davis came into the diner. Nan waited on this handsome Arkansas boy, and 6 weeks later they married. That marriage lasted 65 years until Sanford went to Heaven. At the age of 53, she went to night school and earned her G.E.D. She loved to knit and crochet. She was a member of the First Baptist Church Women's Missionary Society's Eastern European Circle, a member of the choir, and a member of the Best Years' Club. Her daughter, Barb, says that her mother was the hardest working woman she's ever known. She loved to clean. Her son, Jim, says she made the best potato salad and chicken and dumplings in the world. But most of all, she is known for loving and taking care of her husband, Sanford. I'm sure he was at the gate to welcome her home. The service will be held on Tuesday, August 17, 2021 at 12 p.m. with a visitation one hour before from 11 a.m. to 12 p.m. at Memory Lane Funeral Home 6305 W. Lincoln Hwy Crown Point, In 46307. Interment to follow.

Nan Davis was born on September 29, 1935 in Bybee, Tennessee. She went to Heaven on August 13, 2021. She was the daughter of Jake and Arie Holt and had 6 brothers and 1 sister. Nan outlived all of her siblings. She is survived by her son,... View Obituary & Service Information

The family of Nannie Davis created this Life Tributes page to make it easy to share your memories.

Send flowers to the Davis family.