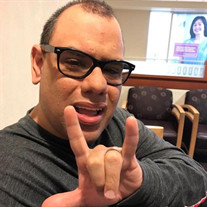 Nicholas "Nick" Theodore Almeida, 40, of Crown Point, Indiana went to Heaven on Thursday, February 13, 2020. On the day of his birth, November 17, 1979, the family was told Nick would not live, but he was a fighter from the very beginning. He was born at 27 weeks premature and weighed 2 pounds, 7 ounces and was also born deaf. Nick defied all odds and lived a wonderful life with his family and friends. Though Nick never spoke an audible word, he learned sign language to communicate with those around him. He lived life to the fullest! His favorite past time was going out to eat at a restaurant. Nick's favorite theme park was Disney World, and the family took him there over 25 times during his lifetime. Nick participated on a bowling team, loved to go fishing and collected lots of DVDs, and of course, watched them, too. His favorite baseball team was the Chicago White Sox. Nick is survived by his mother, Patricia Almeida; his sister, Inez Perez-Almeida; his brother, James (Jeni) Almeida, Jr.; his nephews: Joshua and James III; great nephew, Jaxon; and his niece, Brianna. He is also survived by his closest friend, Alicia Flores; his favorite cousins: Arlene, Jacky, Heather, Addy and Zack; his loving uncles: Jesse and Fred; and his loving aunts: Nancy and Angie. Nick was preceded in death by his father, James Almeida, Sr. A visitation will be held on Wednesday, February 19, 2020 from 10:00 a.m. - 1:00 p.m. at Memory Lane Funeral Home, 6305 W. Lincoln Highway, Crown Point, Indiana. The funeral will begin at 1:00 p.m. with an entombment after the funeral service. For further information, please contact the funeral home. www.memorylanepark.com

Nicholas "Nick" Theodore Almeida, 40, of Crown Point, Indiana went to Heaven on Thursday, February 13, 2020. On the day of his birth, November 17, 1979, the family was told Nick would not live, but he was a fighter from the very beginning.... View Obituary & Service Information

The family of Nicholas "Nick" Almeida created this Life Tributes page to make it easy to share your memories.

Send flowers to the Almeida family.