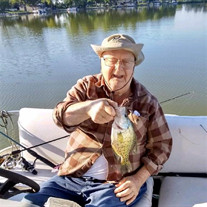 Norman Dale Creviston, 94, lost his battle with cancer on 10/29/2021. He is survived by his four beautiful daughters, Dawn (Charles) Rice, Dale Morelli, Diane Randolph, and Darlene Creviston; granddaughter Danielle Sisk and her four children, Deesiree, Elijah, Destiny, and Dai Lana; grandsons Nathan and Jacob Morelli; and many nieces and nephews. Also survived by his very best friends Sam and Angie Manter and their children Sara and Sam whom he loved as much as his own children. Preceded in death by twin babies, Gary Michael Creviston, and sister Luella Mae Kozlowski. Norman was born on October 26, 1927 and came in first place in a baby contest. He was at the top of his game with everything starting with basketball. He graduated from T.F. North. If you didn’t know Norman Creviston, you would know him by reading the Hammond Times as his picture was in most often. All through his service with the Marines, he played basketball semi-professionally. He worked for Nickelplate Railroad for nearly a decade before opening his business in the late 50’s, Creviston Janitorial Service. He loved to fish, even the Reader’s Digest did an article on him but he still kept some of his fishing secrets to himself. He loved golf, scoring a hole in one his first year, and helped co-found the Chilidippers golf league. He loved to bowl and hunt as well, went to Canada to hunt and always brought back an Elk or two. Even playing pool or poker he usually won. He excelled at everything! Norman was a character and will be missed. Even just a few weeks of his passing, he was driving and going fishing. He was one of a kind. A visitation will be on Friday, November 5, 2021 from 10 a.m. to 12 p.m. with a memorial service immediately following at 12 p.m. at Memory Lane Funeral Home 6305 W. Lincoln Hwy, Crown Point, IN 46307. Burial to follow.

The family of Norman Dale Creviston created this Life Tributes page to make it easy to share your memories.

Send flowers to the Creviston family.