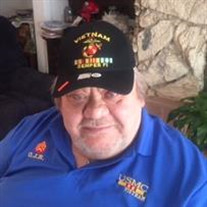 Otto John Rodriquez, 71, of Dyer, Indiana, entered eternal life on August 28, 2017, surrounded by his loving family. He is survived by his loving wife of 43 years, Marianne Rodriquez (nee Gowatch); his daughter, Michelle (Jonathan) Foster, and his beloved grandson, Ryne Foster. He is also survived by his brother and sister-in-laws: Joseph and Toni McGarry, Ray and Sue Rickert, and Michael and Debbie Gowatch; and his nephew Benjamin Rickert. He was preceded in death by his daughter, Janine Rodriquez; his parents: John and Elizabeth Rodriquez; and his father-in-law, Vito Gowatch. Otto proudly served in the United States Marine Corps from January 1965 to January 1971, achieving a rank of Sergeant. He was awarded multiple badges and medals, and fought in the Vietnam War. He often spoke of and shared his experiences with others expressing the significance of that chapter in his life. After the military, he married, had two children, and later became a proud grandfather. Otto worked on numerous construction projects in the Chicagoland area as a member of Laborer’s Construction Union Local #4. He was a loving family member and friend who was always willing to lend a helping hand. A viewing will be held on Wednesday, September 6, 2017 from 5:00 - 8:00 p.m. at the Memory Lane Funeral Home, 6305 W. Lincoln Highway (US 30), Crown Point, Indiana. A visitation will be held on Thursday, September 7, 2017 from 9:00 – 10:00 a.m. at St. Maria Goretti Parish, 500 Northgate Drive, Indiana, with a 10:00 a.m. mass to follow. A committal service with military honors will be held after the mass at the Memory Lane Memorial Park Mausoleum in Crown Point, Indiana. You may leave a condolence for the family and order flowers on the funeral home website: www.memorylanepark.com. For further information, please call the funeral home office at (219) 322-2050.

The family of Otto John Rodriquez created this Life Tributes page to make it easy to share your memories.

Send flowers to the Rodriquez family.