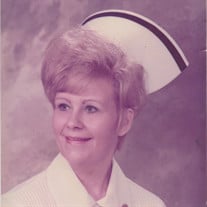 Patricia A. Phelps, age 77, of Valparaiso, IN, passed away on Sunday, November 18, 2018 after an extended illness. Patricia was born on January 22, 1941 in Gary, Indiana to Lawrence & Victoria Baron. She is survived by her loving husband, Carroll David Phelps. They were married on April 4, 1959. Patricia is also survived by her children: Randy (Debbie) Phelps and Donald Phelps, both of Valparaiso, IN; her grandchildren: Aaron, Stephanie, Keith, Brooke and Jorie; her adopted grandchildren: Erin, Joe, Liz and Matt; and her great grandchildren: Jackson, Kennadi, Landon, Ari, Jaleena, Willow and Sophia. She was preceded in death by her parents, Lawrence & Victoria Baron; and her son, Paul Phelps, who passed away in 2011. Patricia was a nurse for 40 years. She worked at Porter Memorial Hospital in Valparaiso, and retired from Broadway Methodist Northlake in Gary, Indiana. She was a loving wife, mother and grandmother. Sewing clothes for her grandchildren and working in the yard and gardening with her husband were things she loved to do. Attending craft festivals with her family were always special times, too. A viewing will be held on Wednesday, November 21, 2018 from 10:00 a.m. – 12:00 p.m. at Memory Lane Funeral Home, 6305 W. Lincoln Highway (US 30), Crown Point, Indiana. The funeral will begin immediately following at 12:00 p.m. with a special tribute from the Nurse’s Association. Burial to follow at Memory Lane Memorial Park. In lieu of flowers, the family is asking that donations be made to your favorite charity in honor of Patricia. Please call the funeral home office for further information (219) 322-2050. www.memorylanepark.com

Patricia A. Phelps, age 77, of Valparaiso, IN, passed away on Sunday, November 18, 2018 after an extended illness. Patricia was born on January 22, 1941 in Gary, Indiana to Lawrence & Victoria Baron. She is survived by her loving husband,... View Obituary & Service Information

The family of Patricia Anne Phelps created this Life Tributes page to make it easy to share your memories.

Send flowers to the Phelps family.