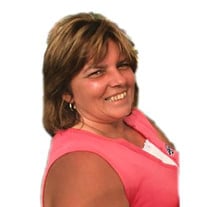 Peggy Ann Kelly (nee Emke), age 65, passed away on Saturday, April 6, 2019 after an extended illness. Peggy was a devoted wife to her husband, Dennis, and a loving mother of 8 children and 18 grandchildren. She was born on March 8, 1954 in Lackawanna, New York to Herbert & Faye Emke. On February 23, 1974, she married Dennis James Kelly. They first met at the young age of 8, living just on the other side of the building from each other. Peggy’s family moved away, but several years later they ran into each other at the county fair; the rest is history. That began the 47-year romance that has lasted until this day. Peggy devoted herself to her husband, setting an amazing example of loyalty and dedication as a wife. People who know Peggy will tell you she was the hardest working woman on the planet. She was the Head Cake Baker at Meijer for 16 years sharing her creative side with others and their children. Peggy was known for her ministry and servant’s heart. While her husband was in college, they were in the Sailor Ministry at First Baptist Church of Hammond, Indiana. In those 6 years, she and Dennis housed and fed over 3,000 sailors, who would fondly call Peggy, “MOM!” Peggy was a “MOM” not to just her 8 kids and thousands of sailors who passed through their home, but also her kid’s friends and their friends. Peggy loved being a mom to thousands of sailors, Hammond Baptist kids, Hyles-Anderson College students and her 8 kids. Peggy had a servant’s heart and had a spiritual gift of being a caretaker. If you asked her what she was most proud of, she would proudly say, “the wife of Dennis Kelly,” who she adored, loved and treated like a king until her last breath. Peggy is survived by her husband, Dennis; her 8 children: Ryan Kelly, Aaron Kelly, Kristina Jones, Matthew Kelly, Elisabeth Novak, Denny Kelly, Rachel Kelly and Philip Kelly; her 18 grandchildren: Mackenzie, Miranda, Zandyr, Aiden, Ian, Adelaide, Navaeh, Eli, Lucas, Emmalyne, Dallas, Harper, Averleigh, Ashtyn, Jackson, Kash, Malakai, and Beckham; her siblings: Gail White, Mark Emke, Danny Emke, Dale Emke, Keith Emke, and Timothy Emke; and many nieces and nephews. Peggy was preceded in death by her parents: Herbert and Faye Emke; and two unborn children. A viewing will be held on Friday, April 12, 2019 from 5:00 - 8:00 p.m. at the Memory Lane Funeral Home, 6305 W. Lincoln Highway (US 30), Crown Point, Indiana. The funeral service will be held on Saturday, April 13, 2019 at 11:00 a.m. at Memory Lane Funeral Home with a viewing from 10:30 -11:00 a.m. before the service begins. Burial immediately following the service at Memory Lane Memorial Park Cemetery. You may order flowers directly from the funeral home website: www.memorylanepark.com For further information you may contact the funeral home at (219) 322-2050. www.memorylanepark.com

Peggy Ann Kelly (nee Emke), age 65, passed away on Saturday, April 6, 2019 after an extended illness. Peggy was a devoted wife to her husband, Dennis, and a loving mother of 8 children and 18 grandchildren. She was born on March 8, 1954 in... View Obituary & Service Information

The family of Peggy Ann Kelly created this Life Tributes page to make it easy to share your memories.

Send flowers to the Kelly family.