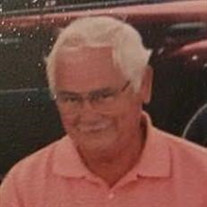 Raleigh R. Parker, 81, of Crown Point, Indiana, passed away peacefully on Thursday, October 5, 2017, in Hospice care of congestive heart failure after a long battle with progressive cardiovascular disease. He is survived by his wife of 57 years, Linda Rae Parker (nee Davis); daughter, Sheila (Mick) Newman of Valparaiso, Indiana, and son, Michael Parker of Fort Wayne, Indiana; sisters: Janice (Floyd) Pierce, and Cynthia (Michael) Frolich; his grandkids: Alisa (Leigh) Suggs, Joel (Alisha) Newman, Joshua (Jessy) Newman, Stacy (Sam) Widdal, Parker Newman, Zoe Parker, Sawyer Newman, and PJ Parker, and five great grandchildren and another one due in March, 2018. He was proceeded in death by his parents, Brownlow and Eunice Parker, and by his brothers: Jack Parker and Phillip Parker. Raleigh graduated from Tryon High School in North Carolina where he was a star quarterback on the football team. Also in high school he caddied and that started a life-long love of golf. He was very good at golf and shot par many times, and during his lifetime he had three hole-in-ones. He was known for his witty golf quotes and quiet, welcome golf advice. Part of his legacy is all the current golfers who quote him and use his tips. After high school, Raleigh moved North to work at Youngstown Steel in East Chicago. He later joined the Army and served as an Escort Guard while in Germany. After his discharge from the Army, Raleigh came back to the Calumet Region and worked for LTV Steel in East Chicago and eventually retired from there after 30 years. Raleigh was truly a family man. His love for fishing took him on many trips, too. His infectious smile and laugh will be dearly missed. He attended the First Baptist Church of Hammond, Indiana for many years where he was a deacon, an usher, a church greeter, and for over 20 years he was a tour guide for the church where he gave tours of the church facilities after the Sunday morning service. A visitation and memorial service will be held on Wednesday, October 11, 2017 from 10:00 a.m. – 12:00 p.m. with the service beginning at 12:00 p.m. at the Memory Lane Funeral Home, 6305 W. Lincoln Highway (US 30), Crown Point, Indiana. Condolences may be left and flowers may be ordered on the funeral home website: www.memorylanepark.com. For further details, please call the office at (219) 322-2050.

Raleigh R. Parker, 81, of Crown Point, Indiana, passed away peacefully on Thursday, October 5, 2017, in Hospice care of congestive heart failure after a long battle with progressive cardiovascular disease. He is survived by his wife of 57... View Obituary & Service Information

The family of Raleigh Redford Parker created this Life Tributes page to make it easy to share your memories.

Send flowers to the Parker family.