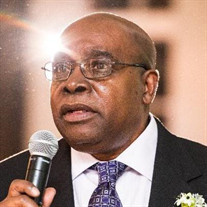 Ralph Cook, age 83, of Schererville, Indiana, passed away on Saturday, November 30, 2019. He was the youngest of four children, was born to the late Nancy Bell and Theodore Cook Sr. on October 28, 1936 in Chicago, Illinois. His brothers, Theodore Cook Jr. and Robert Cook, and his sister, Flora Lee Cook Wheaton, preceded him death. Ralph confessed Christ and was baptized at an early age. He later renewed his faith as an active member of Calvary Baptist Church of Glenwood. During his time as a member, he served dutifully on the Usher Board and in other capacities. Ralph attended Wendell Phillips High School and later enlisted in the U.S. Army in 1954. Hard work defined Ralph. After serving his country, Ralph worked for the U.S. Post Office, as a Chicago Deputy Sheriff, and as a security guard in the Chicago Public School system, retiring from each of them after more than 20 years of service. While working at the U.S. Post Office, Ralph was elected Union Steward of his fellow union members, and he fought hard for the rights, wages and jobs of his fellow union members. During his formative years, in addition to working three full-time jobs, he worked actively in Chicago politics. His work on campaigns for various Aldermen, even the Honorable Mayor Harold Washington, contributed to a positive impact on the community and truly personified the kind of advocate he was. Ralph’s soul was summoned Home on the evening of November 30, 2019. A dedicated husband and father, Ralph leaves a full family to cherish his memories. He is survived by his loving wife of 42 years, Mrs. Erma Cook; his five children: Ralph Jr., Sereda, Anthony, Derrick, and Michael (Jenelle); 12 grandchildren: Niyia, Stephon, Jevell, Arnetta, Darnell (deceased), Rudolph, Latoya, Randy, Ashton, Aubrey, Slaone, Stokely, and Miles; and many great-grandchildren. A viewing and visitation will be held on Friday, December 6, 2019 from 10:00 - 11:00 a.m. at the Calvary Baptist Church, 801 E. Glenwood-Dyer Road, Glenwood, IL 60425. The funeral will immediately follow at 11:00 a.m. at the church. Burial, with military honors, will be at Memory Lane Memorial Park, 6305 W. Lincoln Highway (US 30), Crown Point, Indiana. Memory Lane Funeral Home is handling the arrangements. (219) 322-2050. www.memorylanepark.com

Ralph Cook, age 83, of Schererville, Indiana, passed away on Saturday, November 30, 2019. He was the youngest of four children, was born to the late Nancy Bell and Theodore Cook Sr. on October 28, 1936 in Chicago, Illinois. His brothers, Theodore... View Obituary & Service Information

The family of Ralph Cook created this Life Tributes page to make it easy to share your memories.

Ralph Cook, age 83, of Schererville, Indiana, passed away on...

Send flowers to the Cook family.