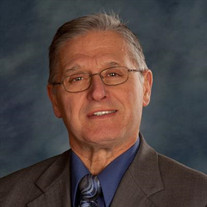 Randall G. Ericson, 71, formerly of Schererville, Indiana, departed this life after a valiant battle with cancer. His undaunted spirit and gratitude for life never succumbed to disease. He esteemed his friends above himself. He enriched his family with love and wisdom. He graduated from this life with his eyes fixed on Jesus. Born in Chicago, Illinois on May 11, 1945, he went home to Heaven on December 13, 2016 from The Villages, Florida. He served as a medic in Vietnam as part of the 51st Medical Division during the years 1964 - 1965. Upon returning from war, he became a licensed plumber in Chicago. After giving his life to the Lord in 1971, he put his skills to use in the Lord’s work. As a member of First Baptist Church of Hammond, he served on staff as the head of maintenance for 39 years. He served as a fervent and faithful Sunday school teacher to 2nd grade boys for 45 years. His life can be summed up as a faithful servant who used the tools he was given to invest in the lives of others. He never wanted to minister to thousands, but at the end of his life, he did reach thousands. He just did it one person at a time. He was preceded in death by his parents: Raymond N. and Angeline T. Ericson; brother: Barry Ericson, and brother-in-law: Tom Janel. He is survived by his beloved wife, Adrienne; daughters: Jessica (Travis) Bradley of Charleston, WV, and Joy (David) Jorgensen of Dawsonville, GA; 12 grandchildren: Autumn, Travis, Caleb, Kayla, Angelia, Hannah, Curtis, Luke, and Faith Bradley, and Kenton, Nolan, and Corban Jorgensen; and a loving sister: Carole Janel of Oak Lawn, IL. A viewing will be held on Tuesday, December 20, 2016 from 5:00 - 7:00 p.m. at Memory Lane Funeral Home, 6305 W. Lincoln Highway (US 30), Crown Point, Indiana. The funeral will be held on Wednesday, December 21, 2016 at 10:00 a.m. at the First Baptist Church, 523 Sibley (Jack Hyles Memorial Auditorium), Hammond, Indiana. There will be a one-hour viewing prior to the start of the service from 9:00 - 10:00 a.m. Pastor John Wilkerson and Pastor Travis Bradley will be officiating. A private burial will be held at the Memory Lane Memorial Park, Crown Point, Indiana. Please contact the funeral home office for further information (219) 322-2050. www.memorylanepark.com

Randall G. Ericson, 71, formerly of Schererville, Indiana, departed this life after a valiant battle with cancer. His undaunted spirit and gratitude for life never succumbed to disease. He esteemed his friends above himself. He enriched his... View Obituary & Service Information

The family of Randy Ericson created this Life Tributes page to make it easy to share your memories.

Send flowers to the Ericson family.