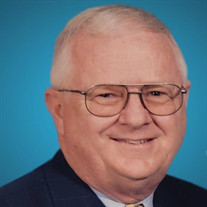 Robert Edward Auclair, Sr. (74) passed away Saturday, August 21, 2021, after a short illness. He was preceded in death by his father, Edward Auclair; mother, Doris Edith Patrick; and sister Marjorie Oaks. He is survived by his wife of 52 ½ years, Nancy; his sister Cindy Gilliam (Roger), his four children, Charin (Marc Patton), Buddy (Doni), Andy (Kristina), and Minda (Abdel Judeh); 13 grandchildren: Nancy, Ben, Esther, Hannah Grace, Travis, Alana, Kirsten, Kaylee, Tyler, Drew, Adam, Kandace, and Derek; and one great granddaughter, Wonder Ellie. Bob was born in Flint, Michigan, on April 3, 1947. At age 7 he was picking pears and heard music coming from a small building, peeked in and was invited to come in. It was a Sunday School extension from Mayfair Bible Church. Bob got saved there at age 10. He was “bus kid without a bus.” His father would drop him off for church, go play chess with his buddies, then pick him up after the service. When he graduated from high school in 1965, his youth pastor directed him to Bob Jones University in Greenville, South Carolina. The third day of college, sitting in the front row of chapel, God got a hold of his heart and called him into full-time Christian service. He married Nancy Ellis on December, 21, 1968, during the Christmas break of their Senior year. Upon graduation, Bob went on to grad school for his masters’ degree, while Nancy began teaching school. After graduation, they went to Fort Davis, Texas, and started Blue Mountain Church and School for ninth and tenth grades. In May of 1972 they came to FBC, Hammond to teach at Hammond Baptist Schools. Bob taught English in the high school for one year, then became principal: 10 years at Hammond Baptist Grade School, 3 years at Hammond Baptist High School, and 2 years at City Baptist Grade School. He was also Assistant Superintendent of Hammond Baptist Schools for 20 years. He taught at Hyles-Anderson College for 27 years. He was captain of bus route 44 for 29 1/2 years. Bob also taught High School II with Mrs. Colsten and was superintendent of Junior 3. He loved working with kids and did VBS, junior camp, Eagles Club soul-winning for fathers and sons, and Summer Fun for boys. After leaving the schools, he became editor of “The Voice”, the church newspaper. In 2010 he began working at Park Press Printing Company, and then was back to the church to work with the Better Roads Recovery men for 1 1/2 years. He retired in December, 2020, after completing 40 years of ministry at First Baptist Church. Not wanting to sit around, retired, he became a Door Dasher! One of his passions was photography, and he took photos of countless weddings, yearbooks, family events and of course, flowers and trees! Bob loved his wife, children, grandchildren, and 1 brand new great granddaughter very much. He had many “adopted” kids as well. Bob loved his church and his God. He is happy today with his Saviour. He loved life and loved telling people about the way, the truth and THE LIFE. He never knew a stranger and was always a friend to the under-dog. Generous to a fault, he never said no to someone who needed help. Bob was loved by many and will be dearly missed! The visitation will be on Monday, August 23, 2021 from 5 p.m. to 7 p.m. at Memory Lane Funeral Home 6305 W. Lincoln Hwy Crown Point, IN 46307. The funeral service will be on Tuesday, August 24, 2021 at 10 a.m. with a one hour visitation prior to the service. Interment will follow.

Robert Edward Auclair, Sr. (74) passed away Saturday, August 21, 2021, after a short illness. He was preceded in death by his father, Edward Auclair; mother, Doris Edith Patrick; and sister Marjorie Oaks. He is survived by his wife of 52 ½ years,... View Obituary & Service Information

The family of Robert Auclair created this Life Tributes page to make it easy to share your memories.

Send flowers to the Auclair family.