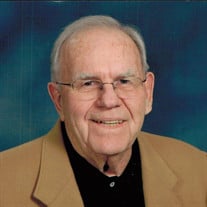 Robert Richard Czerwinski, age 91, passed away peacefully on Thursday, November 5, 2020 at Wittenberg Village, Crown Point, Indiana where he resided. Born in Jamaica, New York on October 31, 1929, he is preceded in death by his father Clarence, his mother Cecile, both of Long Island, NewYork; his step-mother, Mary; his sister, Anne Fisher; and his wife, Lorraine. After high school, Robert attended the New York School of Mechanical Dentistry. He then enlisted in the United States Navy and was stationed in North Carolina. He eventually transferred to Great Lakes Naval Academy in Illinois where he continued his schooling and was their dental technician. After his service, he received an Honorable Discharge, and was given the National Defense Service Medal along with the Good Conduct Medal. It is also there where he met the love of his life, Lorraine Rose Dason, Chicago, at an ROTC Dance. Robert and Lorraine were married for 63 years. In the 1950‘s, after working for other Chicago-area dental labs, Robert began his own business in the basement of his home in Dyer, Indiana. This led to opening his own business, in South Holland, Illinois. His successful business was later moved to a larger location, where he opened Accudent Dental Laboratory, Inc. in Lansing, Illinois. Accudent was known for its stellar work to detail and ethical business practices. He cherished his employees and they felt the same about him, having had employees with 30 years of service. Bob especially loved to spend time with his children and grandchildren to the very end. He enjoyed family vacations, which always began with a letter to his children, setting the expectations for all to pitch in with the work, so our Mom would not be overwhelmed. He loved taking his family to Lake Nuangola, Pennsylvania to be with family on the lake he grew up on. He was an avid golfer and a member at Youche Country Club for over fifty years. He enjoyed giving advice whether it was for his family, a golf swing, or assisting another entrepreneur. He was also a member of the Purdue University Calumet Entrepreneurship Program in Hammond, Indiana. He is survived by his five children: Glenn (Amy) Czerwinski, Washington; Lynn (Dan) Gnass, South Carolina, Gary Czerwinski, North Carolina, Susan (Rubin) Torres, Dianne Bushman (Czerwinski), both of Indiana; eight grandchildren and seven great grandchildren. A memorial service will be held at a later date at Memory Lane Memorial Park & Funeral Home in Schererville, Indiana, and a Celebration of Life will follow. The family would like to express their sincere gratitude to all the staff at Wittenberg Village Healthcare Center for taking care of our father, especially while being positive for Covid-19. In lieu of flowers, money can be donated to: Wittenberg Village Associate Care Fund (wittenbergvillage.org) or The Dementia Society (dementiasociety.org). Please visit www.memorylanepark.com to express online condolences and view the online obituary.

Robert Richard Czerwinski, age 91, passed away peacefully on Thursday, November 5, 2020 at Wittenberg Village, Crown Point, Indiana where he resided. Born in Jamaica, New York on October 31, 1929, he is preceded in death by his father Clarence,... View Obituary & Service Information

The family of Robert Czerwinski created this Life Tributes page to make it easy to share your memories.

Send flowers to the Czerwinski family.