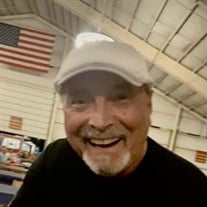 Mario went to be with Our Lord on Saturday December 18, 2021. He was surrounded by his loving wife Rita, children and grandchildren. He was 68 years old at the time of his passing. He was born in Tijuana, raised in East Chicago, IN, raised his family in Hammond and was recently living in Danville. Mario started his career at La Salle Steel in August 1972, retired in 2006 and continued on to Steel Dynamics until 2018. He was an exceptional and dependable worker. He is still fondly remembered by many of his co-workers. Being that he loved this country he served in the U.S. Army and was a proud veteran. Mario and his wife became Snowbirds after retirement and enjoyed every second of it. His other hobby was golfing with family and friends. His favorite was his annual golfing trips with his brother Ruben and nephews Jerry and Fernando, where the laughter began the moment they got in the car. He also loved to beat just about anyone at bags. During his bowling phase he bowled a high 299 and has a bowling pin to prove it. Mario was considered by many not only a friend but a brother, father, best friend and role model. Mario is survived by his wife of 48 years Rita (Mata), his daughters Veronica (Carlos) Jimenez and Melissa (Cesar) Hernandez, grandchildren Mario (Cerina) Hernandez, Arriana (Angel) Guerrero, Leticia Jimenez, Carlos Jimenez and CJ, great-grandchildren Leo, Mathias and Gabriel Hernandez and Baby Girl Guerrero, Brothers Ruben (Graciela) Rodriguez, David (Teresa) Santos, Oscar (Mary) Santos, Mike (Oralia) Santos, and Sister Elizabeth (Louie) Quinones, numerous in-laws, nieces and nephews, and his Brookliner family especially the Doyles. Mario was preceded in death by his great-granddaughter Elena, his parents Antonio and Consuelo Santos and Ruben Rodriguez, and his brother Antonio Santos, Jr. He was very proud of his beautiful family and bragged any chance he got. We, his family, will deeply miss his presence and infectious laughter. It will be very hard to live our lives without him. Viewing will be held on Thursday, December 23, 2021 from 9:30 a.m. to 11:30 a.m. at Memory Lane Funeral Home 6305 W. Lincoln Hwy, Crown Point, Indiana 46307. Procession will proceed to Our Lady of Consolation 8303 Taft St, Merrillville, IN 46410 for Mass at 12 p.m. Burial will follow immediately at Memory Lane.

Mario went to be with Our Lord on Saturday December 18, 2021. He was surrounded by his loving wife Rita, children and grandchildren. He was 68 years old at the time of his passing. He was born in Tijuana, raised in East Chicago, IN, raised his... View Obituary & Service Information

The family of Robert "Mario" Rodriguez created this Life Tributes page to make it easy to share your memories.

Send flowers to the Rodriguez family.