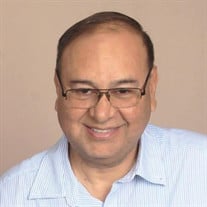 Missionary Robert Murillo joined his loving Savior Jesus Christ while on the mission field of Guadalajara, Mexico. Robert has been introducing his Savior to many souls since he was a teenager when he accepted Jesus Christ as his own personal Savior. Robert shared Christ’s love wherever and whenever to whomever would listen and had been a missionary for close to 40 years. Robert passed into eternity on Wednesday, April 14, 2021 in Guadalajara, Mexico. After a successful kidney transplant, he was taken by a virus that eventually damaged his lungs and caused cardiac arrest. Robert was born and raised in East Chicago, Indiana. He is a graduate of East Chicago Roosevelt High School and has a Bachelor and Master’s Degree of Divinity from Hyles-Anderson College. He went to language school in 1981 and then went to Monterrey, Mexico in 1982 to work with Dr. Tommy Ashcraft and the Mount Hebron Baptist Church and Bible Institute. He was then married on July 20, 1987 to Rebecca Joy Garlick. Robert and Joy started the Independent Baptist Church of Guadalajara on May 7, 1989, and Robert was the pastor for almost 32 years until his death. In 1999 due to a tragic accident, the Annabel de Vallejo Home was born. This orphanage has provided love and guidance for hundreds of children throughout the years and presently has 61 children in their care. Robert is also the Founder and President of Latin American Ministries and Beyond, Inc. L.A.M.B. reaches the Spanish speaking countries with the gospel. Preceded in death were his parents, Agustin and Dolores Murillo. Surviving Robert is his loving wife and life partner in ministry, Rebecca Joy Garlick Murillo, their seven children, Hannah (Romel) Sorto, Josue/Joshua, Caleb, Talitha, Samuel, Elijah,and Rebecca. He is also survived by his four siblings John (Teresa) Murillo of Fayetteville, Arkansas, Carmen (Juan A.) Escobedo of Highland, Indiana, Estela (Alex) Coriano of Crown Point, Indiana, and Anita (Jack) Rose of Prosper, Texas. Robert was the loving grandfather of their two grandsons, Mathew and Levi Sorto. He is also survived by his many nephews and nieces. The funeral service will be held on April 24th at 2:00 p.m. at First Baptist Church, 473 Sibley Street, Hammond, Indiana 46320. Pastor John Wilkerson. The viewing will be from 12 noon to 2:00 pm. before the service. The internment will be on Monday, April 26, at Memory Lane, 6305 W. Lincoln Way, Crown Point, IN 46307. In lieu of flowers you may make donations to the Annabel de Vallejo Home, P.O. 3180, Mission, Texas 78573 or on line by going to [email protected] via PayPal.

Missionary Robert Murillo joined his loving Savior Jesus Christ while on the mission field of Guadalajara, Mexico. Robert has been introducing his Savior to many souls since he was a teenager when he accepted Jesus Christ as his own personal... View Obituary & Service Information

The family of Robert Murillo created this Life Tributes page to make it easy to share your memories.

Send flowers to the Murillo family.