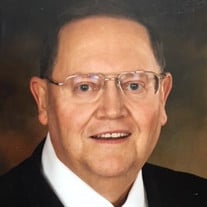 Roger D. “Dan” Daniel, 71, of Crown Point, Indiana, (formerly of Roanoke, Alabama) went to be with the Lord on Monday, April 2, 2018. He is survived by his wife, Caroline Stachulak Daniel; daughters: Sheri (Ronnie) Williford of Richlands, NC; Ronda (Rusty) Guin of Martinsburg, WV; one son: Ron (Carole) Spaid of Franklin, TN; six grandchildren: Timothy Spaid of Franklin, TN; Chelsea (Zachary) Getts of Richlands, NC, Brittany (Jon) Beil of Martinsburg, WV, Jordan (Charity) Guin of Martinsburg, WV, Joshua Guin of Crown Point, IN, and Jaclynn Guin of Martinsburg, WV; two brothers: David (Margie) Daniel of Roanoke, AL, and Phillip (Pam) Daniel of Roanoke, AL; and many nieces and nephews. Dan was preceded in death by his parents, R.C. and Mary Nell Daniel of Roanoke, AL. Dan graduated from Auburn University with an electrical engineering degree and later received a Master of Education degree at Hyles-Anderson College in Crown Point, IN. He enjoyed teaching college math and science for many years, as well as working as a campus host. He was generous with his time and talents for the Lord and was known for his “golden voice” which he used to glorify his Saviour. He was a dear friend to many and a devoted man to his family. In lieu of flowers, donations can be made to www.thekeyfm.com in memory of Dan Daniel. “The Key” radio station, 90.5 FM, is associated with the First Baptist Church of Hammond, Indiana, and was a blessing to him daily, especially during his hospital stay. A viewing will be held on Thursday, April 5, 2018 from 4:00 p.m. to 7:00 p.m. at Memory Lane Funeral Home, 6305 W. Lincoln Highway (US 30), Crown Point, Indiana. The service will be held at the funeral home on Friday, April 6, 2018 at 1:30 p.m. with a one-hour viewing prior to the service. You may call the office for further information (219) 322-2050. www.memorylanepark.com

Roger D. &#8220;Dan&#8221; Daniel, 71, of Crown Point, Indiana, (formerly of Roanoke, Alabama) went to be with the Lord on Monday, April 2, 2018. He is survived by his wife, Caroline Stachulak Daniel; daughters: Sheri (Ronnie) Williford of... View Obituary & Service Information

The family of Roger "Dan" Daniel created this Life Tributes page to make it easy to share your memories.

Send flowers to the Daniel family.