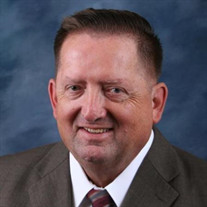 Roger Mullinax, age 70, went to Heaven to be with the Lord on Friday, January 15, 2021. He slipped away peacefully with his dear wife by his side. Roger was known by all as a diligent, humble, caring man. He had a child-like faith in everything he asked of God or endeavored to do. He was faithful to the Lord, his wife, and children. We will greatly miss the way he liked to playfully tease others just to make them smile and the peculiar nicknames he came up with for his loved ones and friends. Roger was born in Mt. Vernon, Illinois on January 24, 1950, to his parents Charles and Iona Mullinax. In August 1968, at the age of 18, he enlisted in the Navy. He proudly served our country in the Vietnam war. While in the Navy, a fellow sailor led Roger to trust Christ as his Savior. Praise the Lord! He began a new life in Jesus, which eventually led him to Hyles-Anderson College, where he graduated in May of 1987. Roger had a servant's heart. At church, he was a bus captain and bus driver for several routes in Chicago and brought many people to church through the bus ministry. He impacted many people's lives for eternity. He also served at Hyles-Anderson College as a maintenance engineer for 20 years. For over 30 years, Roger owned an HVAC business. He installed and repaired furnaces, air conditioners, and refrigeration systems for hundreds of homeowners and businesses in Lake County. He had a good reputation in the community of being knowledgeable, fair, and honest. He was preceded in death by both parents and two siblings, Randy (Teresa) Mullinax and Donna (Rob) Rogers. He is survived by loving family, including his wife Mirna Mullinax and seven children, namely, Aaron (Cindy) Mullinax, Esther Strobbe, Hannah Reed, Libby Mullinax, Keiry (Michael) DePaolis, Oscar (Rachael) Monge, Jonathan Cisneros; four siblings, namely, Jack (Judith) Mullinax, Joyce (Don) Sartin, Don (Beverly) Mullinax, Carla (Maurice) Mullinax, 14 grandchildren; and nieces and nephews. Services will be held at the Jack Hyles Memorial Auditorium at 523 Sibley Street, Hammond, IN 46320 on Wednesday, January 20th, 2021. Visitation will begin at 10:00 AM with a service at 11:00 AM. Gravesite service will be at 12:45 PM at the Memory Lane Memorial Park at 6305 W. Lincoln Highway (US 30) Crown Point, IN 46307.

Roger Mullinax, age 70, went to Heaven to be with the Lord on Friday, January 15, 2021. He slipped away peacefully with his dear wife by his side. Roger was known by all as a diligent, humble, caring man. He had a child-like faith in everything... View Obituary & Service Information

The family of Roger Mullinax created this Life Tributes page to make it easy to share your memories.

Roger Mullinax, age 70, went to Heaven to be with the Lord on...

Send flowers to the Mullinax family.