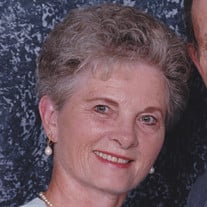 Ruth (Irma) Parker (nee Lucas), 87, of Crown Point, Indiana, passed away peacefully on January 18, 2017, with loved ones by her side. Ruth was the beloved wife of Louis E. Parker, and she is survived by her children: Michael Louis Parker and Kelly James Parker. Also surviving are her beloved grandchildren: Jean-Luc Parker and Brandon James Parker; her daughters-in-law: Denise Parker (nee Pangburn) and Kathy Parker (nee Bruce); her siblings: Jeanne Miller (Lucas), Nita Sobers (Lucas), Gary Lucas, Gordon Lucas, Roy Lucas, and Jack Lucas. She was preceded in death by Dale Lucas, Jim Lucas, Franklin Lucas, Eilean Lucas, Douglas Lucas, Norma Lucas, and Billy Lucas. Ruth grew up in central Wisconsin and after getting married, she and Louis moved to Milwaukee. After her mother-in-law passed away, she and Louis raised his three sisters, and also had two children of their own. In the early 1960’s they moved to the Chicagoland suburb of Dolton, Illinois until 1990 when they moved to Crown Point, Indiana. Her tenacity, strength and perseverance will be greatly missed. She had a great love of family and enjoyed watching her grandchildren grow up to be successful in life. Her love of plants, especially flowers, can never be forgotten as seen by the pages and pages of photos from over the years. She loved genealogy and gave us the ability to trace our roots and reinforce our place in history. Because of her work with our family genealogy, we are able to trace the steps of our fore fathers and the struggles and journeys they took to get us where we are today. As we too become part of that tree, her memory will live on forever and she will continue to be a force for many generations to come. In lieu of flowers, please make a charitable donation to the charity of your choice in the name of Ruth Parker. We all have been touched by Dementia (Alzheimer’s), Cancer or Heart Disease, and we hope that no one will have to endure the heartache and suffering that accompanies these dreaded diseases. No public services are being planned at this time. Memory Lane Funeral Home, 6305 W. Lincoln Highway, Crown Point, Indiana, is handling the arrangements. You may contact the funeral home for further information (219) 322-2050. www.memorylanepark.com

Ruth (Irma) Parker (nee Lucas), 87, of Crown Point, Indiana, passed away peacefully on January 18, 2017, with loved ones by her side. Ruth was the beloved wife of Louis E. Parker, and she is survived by her children: Michael Louis Parker and... View Obituary & Service Information

The family of Ruth Irma Parker created this Life Tributes page to make it easy to share your memories.

Send flowers to the Parker family.