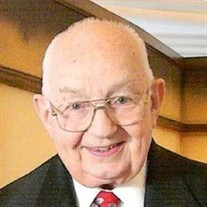 Dr. Samuel Frank Sprunger, 88, of Schererville, Indiana, graduated to Heaven on June 8, 2017. He is survived by his wife of 65 years, Donna Mae Sprunger; his daughters: Rebecca (Jay) Towne of Schererville, Indiana, and Rhoda (Robert) Smith of St. Philip, Barbados; his grandchildren: Ashley Towne, Laura (John) Barnes, Robert Smith, III and Rebecca Smith; and a great-grandchild to be born this December. He is also survived by his sister, Betty Gurley (age 97) of Massachusetts, and sister-in-law, Carol Sprunger of Berne, Indiana; and numerous nieces and nephews. He was preceded in death by his parents, and his brothers: Robert, Donald, Edgar, Eugene, John and Roy. Samuel was born on February 8, 1929 in Monroe, Indiana as the eighth child of Robert & Rhoda Sprunger. His parents owned a small grocery store in Monroe, but after the Depression, the business closed and the family moved to Berne, Indiana when Sam was a small boy. Berne became his hometown and he graduated from Berne-French High School in 1947. After attending Goshen College and then graduating from Bob Jones University, he married his high school sweetheart on September 2, 1951. He graduated from Bob Jones with a Pastoral Theology degree and took his first pastorate shortly after at the Saucon Mennonite Church in Coopersburg, Pennsylvania. He went on to pastor three more churches: Abrams Community Chapel in King of Prussia, Pennsylvania; First Baptist Church in Eaton Rapids, Michigan; and Howardsville Gospel Chapel in Marcellus, Michigan. He and his wife were also the directors of a Children’s Home in Quakertown, Pennsylvania. In 1976, he began teaching Bible at Hyles-Anderson College in Crown Point, Indiana, and his family became members of the First Baptist Church of Hammond, Indiana. Sam taught a boy’s Sunday school class for many years and also taught a “B” Adult Sunday school class. He was a vital part of the Fisherman’s Club soul winning ministry for many years, and also took college young men to Chicago every Friday night to go street preaching. He was given an honorary Doctor of Divinity Degree in 2002 from Hyles-Anderson College. Dr. Sprunger had an infectious laugh and always had a smile on his face. He was well-known for his daily “corn” (jokes) as he started his classes. He was a loving husband, father and grandfather and will be dearly missed. He spent his life serving the Lord and others, just as his Saviour did. I Corinthians 15:57-58. The viewing will be on Thursday, June 15, 2017 from 11:00 a.m. – 1:00 p.m. at the First Baptist Church, Jack Hyles Memorial Auditorium, 523 Sibley Street, Hammond, Indiana. The funeral service will begin at 1:00 p.m. A private entombment will be at Memory Lane Memorial Park, 6305 W. Lincoln Highway (US 30), Crown Point, Indiana. Memory Lane Funeral Home is handling the arrangements. Condolences may be left on the website: www.memorylanepark.com

The family of Dr. Samuel Frank Sprunger created this Life Tributes page to make it easy to share your memories.

Send flowers to the Sprunger family.