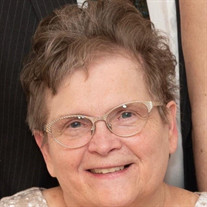 It is with a heavy heart that we are announcing the loss of our beloved Susan Magee (nee Dybzinski). She is survived by her husband of 41 years Jerry, sons John & Ryan, daughters Terri & Liza, granddaughters Fiona & Isabel, brothers Dennis (Pam) Dybzinski, and Joe Magee, sisters Darlene Dybzinski, Sharon (Donald) Langlieb & Joy Fredel. She was known as Aunt Sue to Jennifer (Joel) Adams, Lisa (Jason) Tarter, Douglas (Melissa) Dybzinski, Jeffrey (LaVonne) Langlieb & Nicholas (Holli) Langlieb. She was known as Great Aunt Sue to Emma, Lucas, Colton, Brendan, Tyler, Taylor, Annabelle, Grace & Milena. She was preceded in death by her parents Raymond and Paula Dybzinski. Susan grew up in Gary, Indiana on Cleveland Street with her parents Raymond & Paula, and her siblings Dennis, Darlene & Sharon. She graduated from Horace Mann High School in Gary, Indiana in 1965. She continued with her education following her dreams to become a nurse. In 1968, she graduated from Michael Reese Nursing School in Chicago. She began working at Methodist Hospital in Gary, Indiana following graduation. Susan eventually became head nurse of both Pediatrics and Labor & Delivery. She loved her career and kept many work friends through all the years of her life. She met the love of her life Jerry in 1979. They were married in October of 1980, and celebrated their honeymoon in the Bahamas. Whether on family vacations, or just simply hanging around the house, Sue & Jerry expressed their love to each other daily. In 1987, Sue was diagnosed with Multiple Sclerosis and fought this disease until the very end with Jerry by her side every step of the way. Every step of the way should be taken literally. Whether it was with a cane or walker, she walked until the morning she passed not ever letting MS get the best of her. For many years, Susan was a part of the sorority Kappa Delta Phi Northwest Indiana Chapter. She was also an avid member of TOPS, a weight loss program that met weekly. She made many lifelong friends through TOPS, and loved seeing everyone during the meetings and especially out at lunch afterward. She was arguably the biggest fan ever of the soap opera General Hospital. She loved crossword puzzles, Game Show Network, Jerry’s desserts he was always making, swimming in the pool during hot summers, the Triple Crown winner Secretariat and spending time with her family. She became a stay at home mother when her son Ryan was born proving that family (and friends) were everything to her. She was a devout Catholic who went to mass for over 40 years at St. Joseph’s Parish in Dyer, Indiana. We will miss her warm smile, her infectious laughter and her unconditional love here on Earth. But we are comforted knowing these qualities will shine on us from up above. A funeral service will be held for Susan at St. Joseph’s Church 440 Joliet St. Dyer, Indiana on Monday, December 13th. Visitation begins at 10:30 a.m. and Mass will commence at 11 a.m. with Reverend Gerald Schweitzer officiating. Gravesite service after Mass will be located at Memory Lane Memorial Park & Funeral Home. The address for Memory Lane is 6305 W Lincoln Highway, Crown Point, Indiana 46307.

It is with a heavy heart that we are announcing the loss of our beloved Susan Magee (nee Dybzinski). She is survived by her husband of 41 years Jerry, sons John & Ryan, daughters Terri & Liza, granddaughters Fiona & Isabel, brothers Dennis... View Obituary & Service Information

The family of Susan Magee created this Life Tributes page to make it easy to share your memories.

It is with a heavy heart that we are announcing the loss of our...

Send flowers to the Magee family.