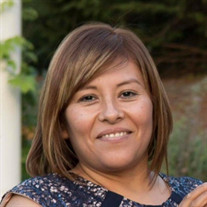 Virginia Medran, 41, of Hammond, Indiana, passed away unexpectedly on Sunday, December 17, 2017. She is survived by her two daughters: Noemi, and Ester; her parents: Pedro & Petra Medran, Sr.; her siblings: Pedro (Yolanda) Medran, Santiago (Leyla) Medran, Elizabet (Apolinar) Guadarrama, Isaac (Erika) Medran, Abel (Hilda) Medran, Ever Medran, Ely Medran, and Josue Medran; and many nieces and nephews. A viewing will be held on Friday, December 22, 2017, from 3:00 - 6:30 p.m. at the First Baptist Church/Jack Hyles Memorial Auditorium, 523 Sibley Street, Hammond, Indiana. The funeral will be held on Saturday, December 23, 2017 at 11:00 a.m. in the Jack Hyles Memorial Auditorium with a one hour viewing prior to the service. Burial will be at the Memory Lane Memorial Park cemetery in Crown Point, Indiana. Memory Lane Funeral Home is handling the arrangements. Flowers may be ordered through the website: www.memorylanepark.com

The family of Virginia Medran created this Life Tributes page to make it easy to share your memories.

Send flowers to the Medran family.