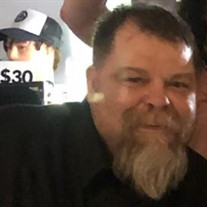 Walter Phares, 54, of Hammond Indiana passed away peacefully at home and entered heaven on Tuesday April 19 2022. He was born on June 26, 1968 to Walter Roland Phares and Alice May Phares. He survived by his loving wife Angelina Phares of 18 years of marriage. Their children; Joshua Phares , Joseph Moralis; adopted nieces and nephew Allison Phares, Noah Phares, and Melody Lopez; aunts and uncles, Carol & Ed Burgans, Terri and the beloved Richard Dimphfl, and Susan & Tom Phares and many more loving family & friends that will miss him dearly. He was preceded in death by his parents, Walter and Alice Phares and his beloved sister Rhonda Phares. Walter was born and raised in Hammond, Indiana area, and is a 1986 graduate of Hammond Baptist School in Schererville, Indiana. Walter also did a 2-year program at Wyoming Tech college. He was a long-time member of First Baptist Church of Hammond Indiana. He worked at Atlas Transmissions for 35 years. Walter was a family man. He loved to be involved in his kid's sports, hobbies, and school activities. He looked forward to date nights with his wife. His hobbies were buying guns, talking about his guns, and going out shooting his guns. He liked to fish when he had a chance, and loved taking family vacations. Walter (Wally, Mondo) was known by everyone wherever he went. He worked on everyone’s cars and transmissions - he was the man to go to for that. He enjoyed riding his Harley Davidson motorcycle. His passion was helping other’s with addictions. He was a former addiction counselor at Reformer's Unanimous. If anyone needed help with anything he was there with no questions asked. He was very proud of his son’s accomplishments and the paths they are taking in life. He was always talking about how proud he is of all the kids doing great things. It made him happy seeing them happy. He had the biggest heart anyone could have. He is greatly loved and missed dearly by so many. There will be a visitation on Tuesday, April 26, 2022 from 3 p.m. to 7 p.m. at Memory Lane Funeral Home 6305 W. Lincoln Hwy Crown Point, IN 46307. Funeral service will be Wednesday, April 27, 2022 at 12 p.m. with a one hour visitation prior to services.

Walter Phares, 54, of Hammond Indiana passed away peacefully at home and entered heaven on Tuesday April 19 2022. He was born on June 26, 1968 to Walter Roland Phares and Alice May Phares. He survived by his loving wife Angelina Phares of... View Obituary & Service Information

The family of Walter Phares created this Life Tributes page to make it easy to share your memories.

Send flowers to the Phares family.