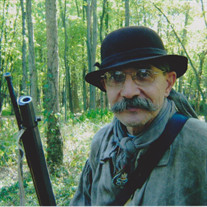 Wayne Milton Fritz, 78, of Merrillville, Indiana, passed away at his home on Friday, April 3, 2020. Wayne was born and raised in Blue Island, Illinois, and graduated from Dwight D. Eisenhower high school. He served in the United States Army from 1964-1966. He retired from the Local Carpenter's Union 272 after 33 years of service. He was a son, brother, husband, father, uncle, grandfather, friend, and a great example to everyone. Way was happiest when he was with his family, reading books by Louis L'Armour, or doing his favorite hobby--black-powder muzzle loaders. Wayne shared his passion and love of the sport by attending black-powder events and doing demonstrations for Sunday school boys. Wayne loved the Lord and served Him by serving in various ministries for over 45 years. He lived out his faith by witnessing to others and expressing God's grace. He was a blessing to his family and friends, and will be greatly missed. He is survived by his wife of 53 years, Flora Fritz (nee Vinke); his children: Wendy (James), Wayne (Monica), Michael (Jane), and Matthew; his seven grandchildren: Victoria, Julie, James, Justin, Rebecca, Nathaniel, and David; and 3 great-grandchildren. Wayne was preceded in death by his daughter, Mechelle Fritz, and his parents: Peter and Josephine Fritz; and his only brother, Peter Fritz. Wayne was an Army Veteran from 1964-1966. The family will have a private funeral service at Memory Lane Funeral Home, 6305 W. Lincoln Highway (US 30), Crown Point, Indiana. Burial will be at Memory Lane Memorial Park Cemetery. In lieu of flowers, donations may be made to the "Jail Ministry" of the First Baptist Church of Hammond, Indiana, which Wayne was a part of. For further information, please contact the funeral home (219) 322-2050. www.memorylanepark.com

Wayne Milton Fritz, 78, of Merrillville, Indiana, passed away at his home on Friday, April 3, 2020. Wayne was born and raised in Blue Island, Illinois, and graduated from Dwight D. Eisenhower high school. He served in the United States Army... View Obituary & Service Information

The family of Wayne Milton Fritz created this Life Tributes page to make it easy to share your memories.

Send flowers to the Fritz family.